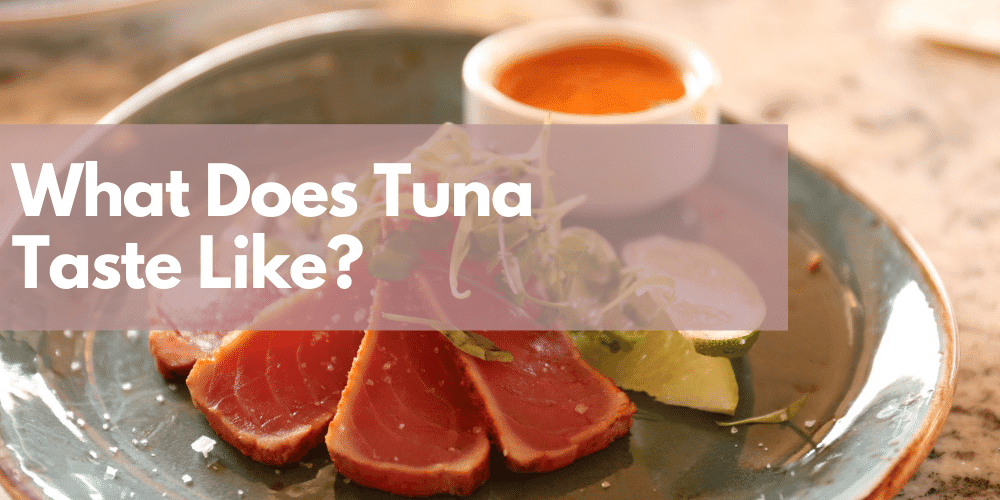 As long as I can remember, tuna has been a hit or miss among my friends. But what does tuna taste like, let’s find out.

Some liked it and some didn’t. But, I had heard people saying that the taste depends on the quality of the tuna you buy and also the way you cook it. Tuna is exceptionally healthy, but how does it taste?

The unique thing about tuna is that the taste changes with the way you cook it. So, a seared fillet of tuna will taste different from a raw sashimi slice of the same fish. The taste also varies depending on the fat content of the tuna.

If you are going to try it for the first time, I’d suggest you look through this guide and decide for yourself how you want to consume it.

Tuna is a popular saltwater fish that is predominantly cooked and eaten across Asian countries.

It is also available in several varieties, including the bluefin, albacore, yellowfin, and the skipjack variant.

It is quite a large fish, both by size and mass. A typical tuna is generally 6.5 feet and weighs around 500 pounds.

One interesting fact about tuna is that the female fish lays over 300 million eggs during the spawning period, but only two out of them survive till adulthood. The remaining ones are eaten by the other carnivorous fishes in the sea.

If left in the wild, a tuna can live up to 30 years. Tunas also get their oxygen directly from the water. Hence they are always swimming without stopping.

Ask any nutritional expert, and they will tell you to include tuna in your daily diet.

It contains a host of vitamins and minerals and is a fantastic source of protein and sodium.

It is enriched with a wide range of healthy fatty acids, which are beneficial for improving your heart health and reducing the risks of stroke, atherosclerosis, and cardiac arrest.

Tuna is also a protein-rich fish, wherein one gram of the fish suffices 80% of your daily protein requirement.

Because the fish has a balanced content of potassium and sodium, it helps regulate the fluid balance of the body, protecting your kidney functions too.

Check more about Tuna and its benefit here.

The taste of tuna is dependent on the way you cook it. But, the majority of the people who have tried raw tuna suggest that it tastes a lot better than raw salmon.

The texture of the fish is a lot similar to chicken, given how meaty the flesh is. Since it’s a carnivore fish, it has a salty taste to it that is a lot more palatable and has a less fishy smell and taste. Do you also want to know what does sushi taste like?

For further ease of understanding the taste, I am going to share about the taste when it’s canned, fresh, and seared.

Canned tuna is the one commercially available and is quite economical too. As for the taste, it has a saltier taste because of the oil-brine it is dipped in. You must check the contents of the can and the variety of tuna that is used. In terms of texture, it has an extremely oily and dry texture.

Nothing beats the taste of fresh tuna. From the mild and neutral flavor to the soft and chewy texture, it is a treat in itself. If you are trying fresh tuna, I’d suggest trying the Albacore tuna. It is the one that tastes the best and has the flavor of the ocean.

Seared tuna is the one mostly used in salads. But, if overcooked, seared tuna can lose its natural flavor, making it taste a lot like cardboard. A light sear from all the sides leaves the exterior of the tuna cooked, but the fish remains raw inside. It is considered the best way to eat it. Pouring a sweet and sour soy vinaigrette on the top further enhances the taste and flavor.

As mentioned above, tuna is available in four main varieties – bluefin, albacore, yellowfin, and skipjack.

The bluefin variety is the most popular type of tuna. It has more fat content and is a lot meatier than the other varieties. As for the taste, this has a fresh and salty taste with a bright red flesh.

If you don’t like the extremely fishy taste of tuna, Albacore is your safest choice. It has a thick flesh but a very mild flavor. The mercury level in this variety is relatively high, so you need to eat it with caution.

Generally, tuna fish is quite expensive, but the yellowfin variant is a lot more economical. It is also known as Ahi tuna and is often used in the raw form in sushi.

If you are trying tuna for the first time, I’d suggest you not try this. It is the fishiest of them all and has the highest fat content. Unlike the other varieties, it is a lot smaller in size.

Tuna is one of the healthiest fishes available. If you don’t enjoy the taste of meat and want to replace it with something just as good, tuna serves the purpose right.

In case you have been wondering about the health benefits of this fish, I have sorted out the best ones for you.

Enriched with Vitamins and Minerals

Tuna is one of the best sources of Vitamin D and B12. It also has zinc, magnesium, iron, selenium, and phosphorus in it. The combination of vitamins and minerals enables better metabolism and prevents the risks of chronic diseases.

Tuna has a high protein content in it. If you are trying to lose weight on a high-protein diet, this is your best bet. It has a healthy blend of fatty acids too, which further regulate your metabolism, promoting weight loss.

Raw tuna is very commonly consumed in sushi and sashimi while the cooked tuna is eaten in salads or by itself.

While raw tuna has a fresher taste to it, the texture drastically changes when you cook it. It is easy to overcook tuna, which is why being careful while cooking is essential. Whether you enjoy raw or cooked tuna is something dependent on your palate and likings. Can you reheat shrimp?

How Does One Know If the Tuna Has Gone Bad?

Tuna is a lot meatier than the other types of fishes. It has a pungent fishy smell and flavor to it, along with the fresh taste of the ocean.

But, if you taste or smell an overwhelming fishy taste to the tuna, it is likely not fresh and has gone bad. A sour taste to the fish is also a signal that the fish has gone bad. In case you feel something amiss with the fish, I’d suggest you avoid eating it altogether.

Tuna is more or less an acquired taste. If you haven’t eaten fish ever in your life, I’d suggest you start with the less fishy varieties first and then make your way up from there. It is also better you try out a freshly caught fish instead of the canned ones. I hope this article is helpful enough to guide you about the taste and texture of the fish. If you haven’t tried it yet, what are you waiting for?