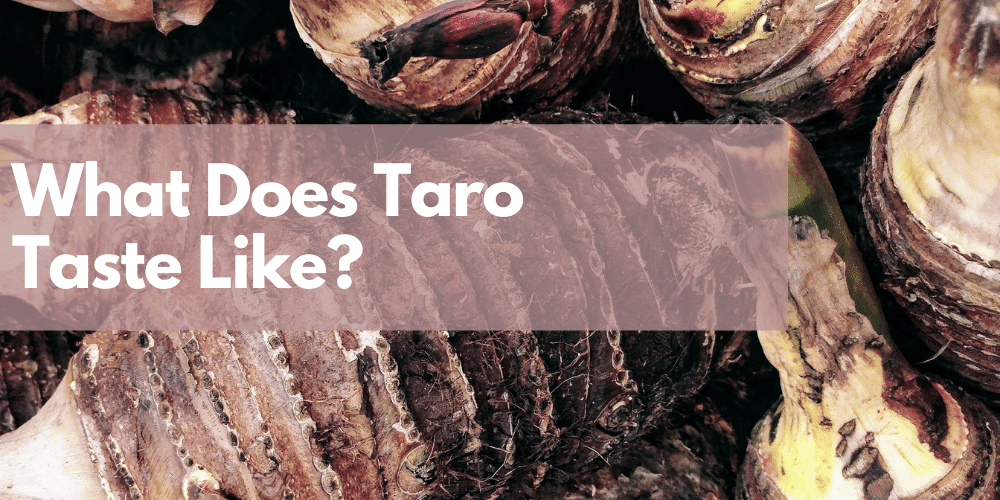 Tubers taste good, don’t they? Let’s find out What Does Taro Taste Like.

Take a potato, for example. Not only does it taste good, but it is incredibly versatile too. Also known as the Potato of the Tropics, taro has a waxy texture with a purple tinge to the appearance.

I am a massive fan of tubers, so it was not even a question of whether I would like it or not. I was a little skeptical, mostly because taro tends to make your throat itchy, but thankfully it didn’t.

That said, I know there are people out there who have never tried this vegetable before. If you are one of them, I’d suggest you scroll down to know everything about taro and the way it tastes.

Also known as Colocasia, taro is a tuber from the Araceae family. The distinct part of this vegetable is its large heart-shaped leaves that grow over the ground.

The vegetable is extremely popular in the South-Asian countries, especially in India and Thailand.

There are several different variants available, some smaller in shape and some larger and elongated in shape. As for the color, they are either stark white or have mild purple hues in the core.

Since this vegetable is found underground, the exterior of taro is muddy and has a hard and rough brown layer with furry protrusions. It is essential to eat cooked taro as the raw form contains high levels of calcium oxalate, which are harmful to the kidneys.

As for the cooking process, taro is cooked in different ways. It can be steamed, fried, seared, or even added to stews.

What are the Nutritional Benefits of Taro?

Tubers are enriched with carbohydrates, so it’s a given that taro has high carb content too. But, what other types of nutrition can you get from this vegetable?

Taro is a rich source of magnesium, potassium, iron, and a combination of Vitamin A, C, and E.

Due to its nutrient balance, taro has promising health benefits. Here are a few of them:

If you have a hard time digesting your food, consuming taro can alleviate that issue. A single serving of taro consists of 25-28% fiber that improves digestion and your overall gastrointestinal well-being.

It enables better water absorption into the GI-tract, reducing the risks of constipation and bloating.

The balanced potassium levels in the taro root have promising benefits in regulating blood pressure levels, thus reducing the risks of hypertension and cardiac diseases. It does so by relaxing the blood vessels in the body.

Although this lacks conclusive studies, the presence of phenolic antioxidants in taro is believed to reduce the risks of cancer. It reduces the free radical damage of the cells in the body, preventing mutation in the cells that further lead to cancer.

Taro has a compound known as Cryptoxanthin, which has proven benefits in reducing the risks of lung and oral cancers.

If you struggle with Type-II Diabetes, consuming taro root now and then could be beneficial.

The dietary fibers in the root have a low glycemic level, enabling better regulation of the blood sugar levels in the body.

Before I discuss the taste, let me walk you through the texture of this vegetable. Taro typically has a very starchy and fluffy texture when cooked. It is a lot similar to what you would expect a potato or a sweet potato to feel like.

Coming round to the taste, taro has a very starchy texture with a subtle sweetness to the taste.

Compared to the other tubers, this one has a nuttier and Earthy taste to it that can be eaten in multiple ways.

Not many would say this, but I feel like taro has a little vanilla kick in the end, preferably something that would work amazingly in desserts.

So, if you see taro mentioned in some of your desserts when you are gallivanting through the South-East Asian countries, you know why.

One unique thing about the taste is that it’s not consistent. The taste varies with the size and the variant of taro you are cooking. The larger ones are often used in savory dishes because of its meatier taste and texture.

If I had to compare the taste of taro to another vegetable, I’d say it tastes the closest to a sweet potato. Have you ever tasted an avocado?

How Should One Cook Taro – Best Recipes

If you have never cooked taro before, being confused is normal. I was too. I wanted my first attempt at cooking it to be a success and to ensure that it at least tastes good.

So, I thought I’d share a few amazing taro recipes that you can try out yourself.

Since taro has a hint of vanilla smell and flavor to it, it is used in bubble teas across several South-Asian countries.

Purple taro is preferably used for this beverage with chewy tapioca pearls that cause an explosion of flavor in your mouth.

Tubers make delicious and crispy fries, and taro is no different. Instead of the regular fries that are unhealthy, switching it up with taro fries baked in the oven can easily feed into your guilty pleasure without affecting your health.

Pair this dish with some ketchup, mayonnaise, or hot sauce on the side, and you are winning.

Much like how sweet potato bake has created a revolution in the vegan world, baked taro is just as delectable. All you need to do is cut the taro into bite-sized pieces and coat it with oil or butter, seasonings, and spices of your choice.

Once done, line them out on a baking tray and bake them till the outside turns golden brown and crispy.

This dish is not readily available and is more of home-cooked comfort food. If you are a vegan or vegetarian and don’t want to eat pork buns, taro buns are a healthy alternative. Instead of the pork filling, boiled and seasoned taro paste is filled inside a pastry dough and steamed.

How Should One Store Taro?

Taro is readily available all across the world. If you live somewhere remote where it is not available throughout the year, I’d suggest you feel the vegetable and store it in airtight containers in the freezer.

It stays fresh in the fridge for up to 3 weeks and up to 5 months in the freezer. But, I’d still tell you to prefer buying fresh taro and cooking it instead of freezing them. Keeping it in the fridge makes the vegetable lose its flavor over time.

If you have made it till here, I hope you now have a basic idea about the taste of taro and how you can cook it. For a tuber that has such versatile flavors, I’d advise you keep the dishes simple to enjoy the actual taste of the tuber. If there’s one dish you want me to recommend you make first, I’d say try out the taro fries. You can also try out the other recipes mentioned.