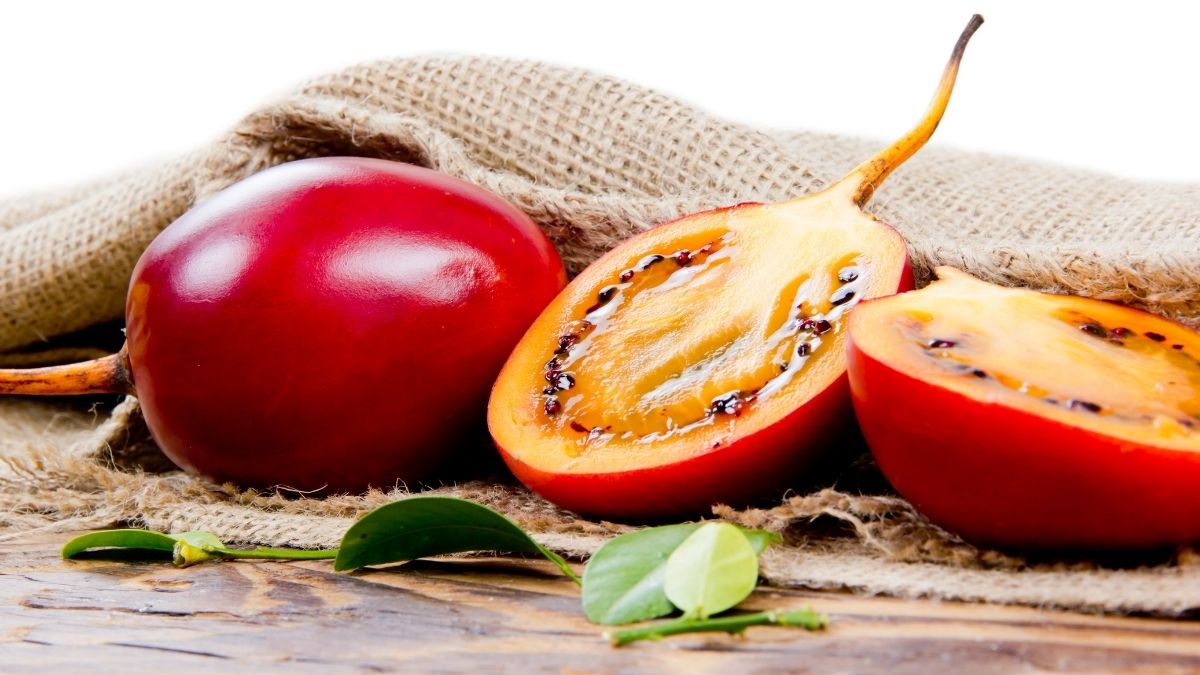 What do you get when you cross a tomato and an armadillo? A tamarillo!

Well, not quite, but a fruit named tamarillo certainly does exist and it does taste like a tomato with the shape of an armadillo.

Tamarillos are fruit grown on trees with a savory flavor. These fruits taste similar to tomatoes but are slightly sweeter and have a tangy bite to them.

What Is a Tamarillo?

A tamarillo is a member of the nightshade family. The fruits have an oblong shape and a bright red-orange skin.

The fruits grow in clusters and are about the size of a duck egg. They’re popular around the world, but are originally from South America.

Even though these plants originated in the tropical regions, they’re now grown and traded around the world. In fact, the majority of tree tomatoes are now grown in New Zealand, California, and even parts of Asia and Africa.

Tamarillos are not only known by that name, but are also known as tree tomatoes. They got the name tamarillo when the New Zealand Tree Tomato Promotions Council decided that the name tree tomato sounded too similar to that of normal tomatoes, and gave them the more Spanish sounding name “tamarillo”.

(Technically, tomatoes are fruits, but I bet that 99% of you didn’t know that. Will you stop buying them now that you’ve learned this fact? The Council seems to think you will.)

Enough with the history. Let’s talk about what tamarillos actually taste like.

These rosy fruits taste quite a bit like tomatoes, which is probably why they were given that name in the first place. They have a slightly sweet and tangy flavor.

Even the seeds of the tamarillo taste quite like those of a tomato. The seeds have a mild, citrusy flavor that pairs well with the tangy and acidic fruit.

The skin of the fruit, however, is not so delicious. It’s quite bitter and most people peel the skin off before sitting down to eat it.

Remember that the color of a tamarillo usually affects its taste. Smaller, more amber-colored fruits have sweeter flesh and taste great in desserts.

Another type of tamarillo is the golden variety. These tamarillos have more sugar in them than red tamarillos, but aren’t as sweet as amber tree tomatoes.

Tamarillos are a fairly healthy fruit to snack on. They contain tons of vitamins, minerals, and other nutrients, including:

These are just a few of the many nutrients that make tamarillos such a healthy addition to your diet.

How to Eat a Tamarillo

The way you eat a tamarillo will depend on whether you plan to eat the fruit raw or whether you’ll be sitting down to some cooked tamarillo. Here’s how to enjoy this fruit both ways.

To prepare raw tamarillo, you’ll start by washing the fruit under cool water. This helps rinse off any dirt and bacteria that might be sitting on its skin.

Next, cut the tamarillo in half using a paring knife. Make sure to cut it in half horizontally rather than vertically.

From there, sprinkle the tamarillo with a bit of sugar. You can use a spoon to remove the pulp from the skin.

If you prefer, you can top your tamarillo with lemon and salt. Some people even enjoy sprinkling a bit of chili powder on the fruit!

If you prefer to eat your fruit cooked, you can do that too! Start by rinsing the tamarillo and placing the clean fruit in a ceramic bowl or heat-proof dish.

Top the tamarillo with boiling water. Make sure that the fruit is fully covered by the water.

Keep the fruit in the water for between three and four minutes. Then, drain the fruit and cover it in fresh, cold water to help the fruit cool down quickly.

Once the fruit is cool, use a paring knife to remove the peel from the fruit. What’s left is a delicious, cooked tamarillo for you to eat! Or you can use it to make tons of dishes – pastas, chutney, or smoothies.

How to Store Tamarillo

Most tamarillo is available frozen, and can be further stored in the freezer until you’re ready to eat it.

For those of you who purchase fresh tamarillos, you can treat them like tomatoes. You should store these fruits on a counter, out of the way of direct sunlight. They can also be kept in the refrigerator to help keep them fresh longer.

If you’re storing fresh tamarillo, whether on the counter or in the fridge, they won’t stay fresh for very long. Tamarillos are good for a few days max before they start to go bad and should be thrown away.

Tamarillo should always be stored in air tight containers. It will usually last for three to five days, but cooked tamarillo can last a little bit longer.

All this talk of avoiding the tamarillo skin has many people wondering whether or not they’re poisonous. The good news is that tamarillo skin isn’t poisonous and is completely safe to eat. However, it doesn’t taste very good, which is why so many people throw it away.

Where Can I Find Tamarillo Fruit?

Depending on where you live, tamarillos are pretty easy to find! In New Zealand, Australia, and South America, you’ll find tamarillos in most grocery stores. In the United States you can head to specialty or organic food stores such as Whole Foods.

Is Tamarillo a Tomato?

Despite the name tree tomatoes, tamarillos are not a variety of tomato at all. In fact, they’re an entirely different type of fruit.