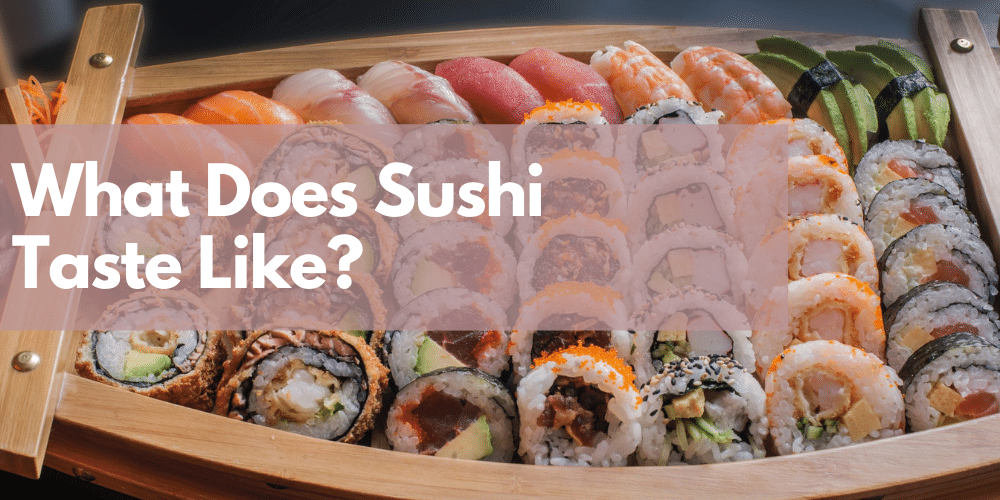 I still remember the first time I tasted sushi, so let’s find what does sushi taste like?

I was alone at home, and I wanted to splurge out on a fancy meal that I didn’t have enough money for. No jokes, I had just started my professional career and wanted to spoil myself and eat out. But, I didn’t want to eat the same thing that I usually did, so I looked up “Best Sushi Restaurants Around Me,” and I booked a table at one.

Going into this new experience, I was too panicked but had a giddy feeling of trying something new and exotic. I wanted to see for myself what the hype was all about, and I know now why people love sushi so much.

If you are in the same position as mine, wanting to try sushi for the first time, I have put down all the little knick-knacks you’d need to know before trying your first bite. So, if you want to know how sushi tastes like, scroll down.

For the beginners out there, sushi is a traditional Japanese food that has layers of the staple vinegared rice on a seaweed sheet, stuffed with vegetables, pickles, and seafood (cooked and raw).

It is often served with a side of pickled ginger, soy sauce, and wasabi. Some restaurants even like to spice up the dishes and serve them deep-fried and with mayonnaise and other cream-based sauces.

Aside from the traditional vegetarian and seafood sushi, there are some other exotic variants too. Some of them are topped with tropical fruits like mangoes and peaches. These have a sweeter taste and are eaten in the end, as a dessert.

If you are trying sushi for the first time, I’d suggest you start with the vegetarian options or the ones with cooked seafood inside. The sashimi-grade raw fish variant is an acquired taste and might not be the best option for your first try. Have you tried tuna?

What are the Different Types of Sushi?

The one thing I was very skeptical about was ordering my sushi dish at a restaurant. The majority of them have traditional Japanese names and terms that I didn’t know about. So, I did some research the day before and sorted out the one that caught my attention the most.

If you are wondering about the types, I have a few lined up for clarifying your doubts.

As for the fish topping, it includes a plethora of options like salmon, eel, shrimp, and even octopus. For a non-traditional approach and to make the dish more palatable, some of them come with a seared, grilled, or deep-fried piece of seafood on top of the rice.

Another popular sushi roll is the Maki roll, otherwise traditionally known as the Makizushi. It features a whole lot of fresh stuffing inside, including thinly sliced juliennes of cucumber, fruits, fishes, etc. Some of them contain fruit slices too.

All the ingredients of the filling are then spread out over a nori sheet and then shaped using a makisu, or the bamboo mat, and cut into thin slices.

This type of sushi is served in a seaweed cone with the same kind of filling that you get in a Makizushi. More than the Japanese descent, this has influences from western cultures, hence the difference in the appearance.

It is one of those rare forms of sushi that is predominantly only available in Japanese superstores and groceries. Unlike the other ones that are stuffed in a seaweed sheet of nori, this type of sushi is mainly wrapped with tofu skin or pouches.

As for the stuffing, it contains the standard portion of rice, vegetables, and seafood. It is a favorite amongst the people who are not very fond of raw fishes.

Check out this recipe on Inarizushi, I love it.

What are the Sides and Condiments?

I have mentioned them briefly in the preceding paragraphs, but given how well they accentuate the taste of sushi, I felt they deserved a separate section about them.

Soy Sauce is added for people to dip their sushi roll in. It adds a sweet and savory taste to the otherwise mild and neutral taste of the sushi.

The one thing you need to keep in mind is to not go overboard with the dunking. You want to maintain a balance with how much of a sweet and salty taste you want in the sushi.

More than a condiment, this is a palate cleanser. It has a sweet, salty, and spicy taste to it that you eat after finishing every bite of a sushi roll.

Not everyone is a fan of this condiment. If you don’t enjoy spicy and hot foods, I’d suggest you steer clear of this. Wasabi is a Japanese horseradish that is made into a fine paste and served on the side. It adds a spicy kick that you can feel at the back of your throat. It is a necessity with the raw sashimi-grade sushi rolls as it smothers the bacteria.

Whenever someone thinks of sushi, they think of the ones with raw fish on top. So, assuming that sushi would have a very fishy stench and taste to it is expected. But, on the contrary, sushi does have a very mild and neutral taste to it.

The taste of the sushi varies depending on the toppings and stuffing of the sushi. The ones with salmon and eel have a very mild fishy flavor that works well when dipped in soy sauce and eaten with pickled ginger.

The best thing about sushi is likely the mix of textures. It has a smooth and creamy taste from the seafood and rice and a slight tang from the soy sauce and rice wine vinegar. If you are eating one with nori outside, it adds a crunchy texture to the dish too.

For those trying the non-traditional sushi varieties like the tropical fruit ones, it has a combination of a sweet and sour taste. sushi, in itself, doesn’t have a strong taste and flavor. It is the sweet and savory soy dipping sauce that saves the day.

Are There Any Specific Sushi Etiquettes?

If you haven’t mastered the art of chopsticks like me, eating sushi with your hands is okay. The majority of the pros tend to use chopsticks, but I would suggest you pick them up with your hands and dip it in soy sauce and eat it. It retains the shape of the sushi and is relatively easy to eat as well.

In case you are eating sushi nigiri with the raw fish, always dip the fish side into the soy sauce instead of the rice side. Doing otherwise will end up disintegrating the shape of the sushi. If you don’t mind the spicy kick, add a little wasabi on top of the fish too.

Another pro tip while eating sushi is always to finish a piece in one bite. You can’t take a small bite and then eat the rest later. It is traditionally eaten in a single bite. Follow it up with some pickled ginger to cleanse your palate to try a new flavor of gobble up the remaining pieces.

I haven’t eaten a lot of sushi. I have possibly tried it a total of 3-4 times, but over time, I have sorted out a few tips that I think would come in handy for those who have never tried sushi before.

Here are some of the quick tips for you:

I hope this simple guide gives you a better understanding of sushi and what it tastes like. If you try it for the first time and don’t like it, I’d suggest you give this another go but with a different type. It is more of an acquired taste and requires a mature palate to appreciate the subtle flavors and taste. The taste for wine is also more of an acquired taste. Try these substitutes for port wine.

I have jotted down every last detail you’d need on your first time experiencing this exotic dish. From the types to the etiquettes involved, everything is covered to ensure an extraordinary experience for you.