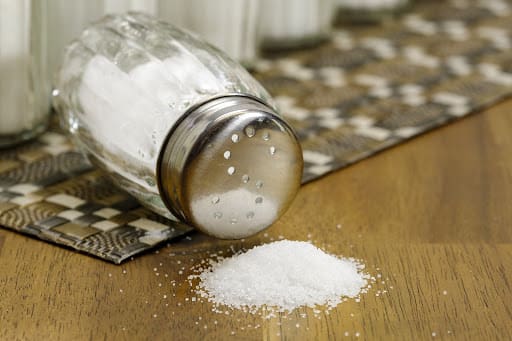 The flavor of sodium (and lithium) is..well, salty. Shocking that salts taste salty, we know. Certain potassium salts, albeit ineffectively, increase salty taste and have been employed as salt substitutes to lower dietary Na+ intake. Saltiness is a metric that determines the mineral content of foods and regulates the consumption of Na+, the central ion that keeps the body’s fluid volume and blood pressure in check. With that in mind, let’s review why salts taste salty.

Table salt (NaCl) is the prototypical salty taste, with a human detection threshold of roughly 130 mmol/L. Many commercially marketed soups include NaCl in concentrations ranging from 100 to 200 mmol/L, which many people find moderately to distinctively salty. It’s unclear how exactly tastebud cells in humans sense Na+ salts.

Although the terms “table salt” and “sodium” are interchangeable, they do not have the same meaning. Table salt is also called sodium chloride in its chemical form. It is a crystal-like substance in abundance in nature. Sodium is a mineral present in salt as one of the chemical components.

If you have been to a beach, you’ve most likely tasted ocean water. It surly did taste salty. It has a faint fishy flavor and is heavier than fresh water. This is due to how our taste receptor cells interact with the molecules. You can make ocean water at home by mixing salt with water. Natural ocean water is similar to that but much worse, and it is not something we would suggest. Trust us your taste buds will thank you.

Can you drink seawater? No, because it’s too salty for your taste receptors and body to manage, and the water contains a variety of toxins that can lead to illness and death. Why would you want to drink something that tastes like a liquid teaspoon of salt?

Sodium is a necessary component of our diet and is also known as sodium chloride (salt). Salt has no odor and dissolves quickly in water, imparting a “salty” flavor to water at concentrations greater than 180 milligrams per liter. Sodium is used for the body’s basic functioning. It is found in all physiological tissues and fluids, and at regular amounts of ingestion via food and drinking water, it is not generally considered dangerous. When the level of sodium (salt) in drinking water is greater than 20 milligrams per liter, the following persons should be aware:

If you have any of these conditions, you should talk to your doctor to see if your prescription has to be altered based on your drinking water’s sodium (salt) level. Parents of infants under the age of six months should be aware of their water’s sodium (salt) content. This is because a baby’s daily sodium intake is smaller than an adult’s. Although an excess of sodium (salt) will not make your baby sick, it is suggested that infant formula be reconstituted with bottled water. Don’t hesitate to contact your doctor to explore this situation further.

Upon waking up, do you get a salty taste on your tongue? This can happen even if you haven’t eaten anything salty recently. You could be mystified why this is happening, and this strange sensation is relatively standard. The salty flavor may be accompanied by bitterness, sourness, or acidity, and there’s a metallic undertone to the taste. We’ll go over some essential details and elements to help you answer those nagging concerns in your thoughts.

A salty taste inside your mouth can be caused by a variety of circumstances, including:

Once the underlying reason for that iconic salt taste in the tongue is discovered, many of the causes are straightforward to address. You can get rid of the salty taste on your tongue by staying hydrated and minimizing your sodium consumption. Any changes in your taste should be reported to your doctor. If the change happens unexpectedly, and you have any additional symptoms or indicators of infection, you should seek medical help.

Why Does NaCl Enhance The Flavor?

Salt is utilized as a universal flavor enhancer since it reduces bitterness while increasing sweetness, sourness, which is desired in sweet dishes. However, it reduces sweetness in more significant concentrations, which is beneficial to savory foods and can contribute a sweet taste. It’s also simple to obtain in its purest form, free of any flavorings.

Too Much Salt Has Long-Term Consequences

Although there are numerous short-term consequences to be aware of, there are also long-term consequences to excessive salt consumption. Enlarged heart muscle, headaches, heart failure, high blood pressure, kidney illness, kidney stones, osteoporosis, stomach cancer, and stroke are all possible side effects.

We hope this review of sodium and some of its characteristics has helped you better understand its flavor profile and best uses. If you’re ever unsure, it’s best to stay away from overly salty foods. We encourage you to read some of our other articles that look at more in-depth flavor reviews such as our article on Adobo.