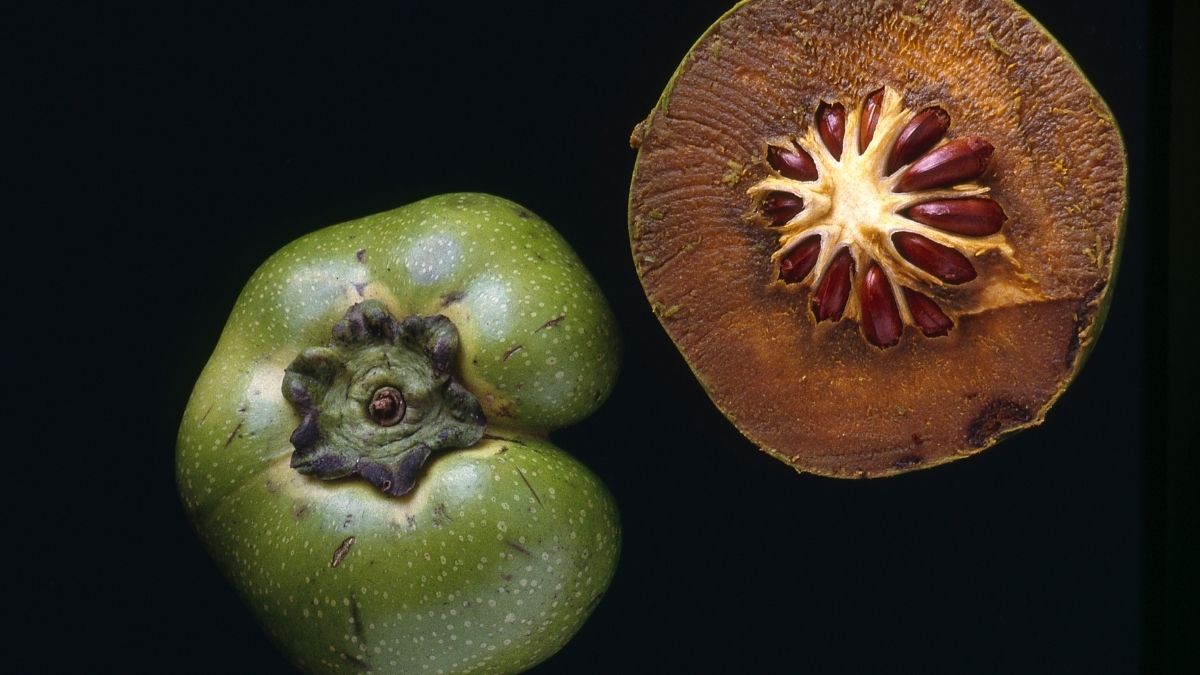 Sapote is a fruit of many names, colors and tastes. It’s also a fruit that’s jam-packed with flavor!

(Plus, it’s a fruit that really screams that looks aren’t everything. Do NOT get discouraged when you look at it!)

The rich and unique flavor of this Caribbean fruit has made it popular in tropical climates. And, with global trade, sapote has quickly made its way around the world.

Sapote is a fruit that tastes sweet and chocolatey. Although unrelated to the cacao plant, you’ll still pick up on the nutty and dark chocolate notes of the fruit.

Sapote, sometimes spelled zapote, is a tropical fruit that’s native to South and Central America. The fruit is known under many names, including:

The fruit is often eaten fresh, blended into juices, or even made into ice cream.

There are several different types of sapote, eac with its own unique characteristics. Let’s check out a few of the more common varieties of this unique fruit.

White sapote is sometimes referred to as a Mexican apple. The plant is native to Mexico, Guatemala, El Salvaador, and Costa Rica and grows on trees in the Rutacea family.

Its alternative name doesn’t lie: white sapote does resemble an apple due to its round shape and green or yellow skin. The fruit has a soft flesh that perishes easily, but you can store it in the refrigerator to help it last longer.

And if you think it looks like a round, unremarkable pear, you wouldn’t be too wrong – at least where the taste is concerned. To be more precise, the flavor of white sapote is somewhere in between banana or pear. Not bad, eh?

It’s sometimes called “sleeping sapote” because its seeds contain a narcotic. I know what you’re thinking right now, but bear in mind that, but the seeds are NOT eaten. In fact, there are claims that they are very toxic if you eat them raw.

The brown flesh of black sapote isn’t exactly mouthwatering – not until you try it.

This type of sapotte is native to Southern Colombia and Mexico. It’s thought to be the original variety of ancient Aztetc sapote!

Today, growers cultivate this plant in warmer climates such as in California. It’s often referred to as the chocolate pudding fruit thanks to its rich brown, cocoa flavored flesh.

So no, it isn’t brown because it’s rotten.

Black sapote is best eaten ripe as they can be quite bitter when unripe. When they’re ready to eat, they have a greenish-yellow exterior and a dark brown interior.

This sapote is native to Mexico and Central America and is sometimes called the Canistel.

Yellow sapote has a yellow-orange fruit that can grow to as much as 7 centimeters in length! The fruit has a sweet taste and is the same color as the yolk of a hardboiled egg.

Thanks to its unique color flesh, the fruit has coined the name “eggfruit”. It’s an evergreen plant that grows mainly in Belize, Guatemala, Mexico, and El Salvador.

Care for some caramel after you feasted on chocolate sapote?

There’s a variety for that too!

Ross sapote is a fruit that is large in size, round, and has a yellow-orange skin. Its flesh is very soft and has a caramel aroma and flavor.

Mamey sapote can be found mostly in northern South America, Mexico, and Puerto Rico. It’s the largest variety of sapote out there and is one of the most well-known, too.

You’ll sometimes find this sapote sold under the name Pouteria Sapota. It has a texture similar to that of grapefruit when ripe, or coconut before it matures.

Your kid is gonna LOVE this one when you tell them that it’s also called Chupa Chupa. Apart from a fabulous native name, this fruit has a yellow-orange flesh that’s sweet in taste and smooth.

The South American sapote comes from a variety of flowering plants known as Malvaceaae. The fruit is native to the Amazon rainforest, and can be found in Ecuador, Peru, Brazil, and Colombia.

Just because it’s named Southern American sapote doesn’t mean you can’t find it in other parts of the world, however. The University of Florida currently has a cultivation project for growing this variety of sapote.

Green sapote is scientifically called Pouteria viridis, and is a flowering plant. The sapote is closely related to many other varieties of sapote, but is much smaller than more common varieties.

The skin of green sapote isn’t all that green after all: it’s either red-orange, green-yellow, or brownish. It is a variety that is well known outside of South America, and is more commonly found in Asia.

Unlike some of its cousins, the seeds of the green sapote are edible. The fruit is most commonly used for making delicious desserts.

Sapote is a mild fruit with a nutty flavor reminiscent of pumpkin. It has a stingy texture, similar to that of butternut squash.

Sapote is much sweeter than pumpkin, however, and tastes a bit like chocolate pudding. People report tasting notes of cacao and coconut in the fruit.

What Is Sapote Fruit in English?

The word Sapote comes from an indigenous South American language, Nahuatl Tzapotl. The word means soft edible fruit. Despite the fact that this word isn’t actually English, the fruit is commonly known around the world as Sapote.

The seeds of certain types of zapote are poisonous if eaten. Black and white sapote seeds, for example, contain neurotoxins that harm the body if you consume them. However, the seeds of other varieties of sapote don’t contain any toxins and are safe for chewing or sucking on.

Where Can I Find Sapote?

Unless you live in South America, it’ll be pretty tough to find sapote in the local supermarkets. The good news is that it’s not too hard to find these fruits in international markets. Specialty food shops will also occasionally have a few varieties of sapote for sale.