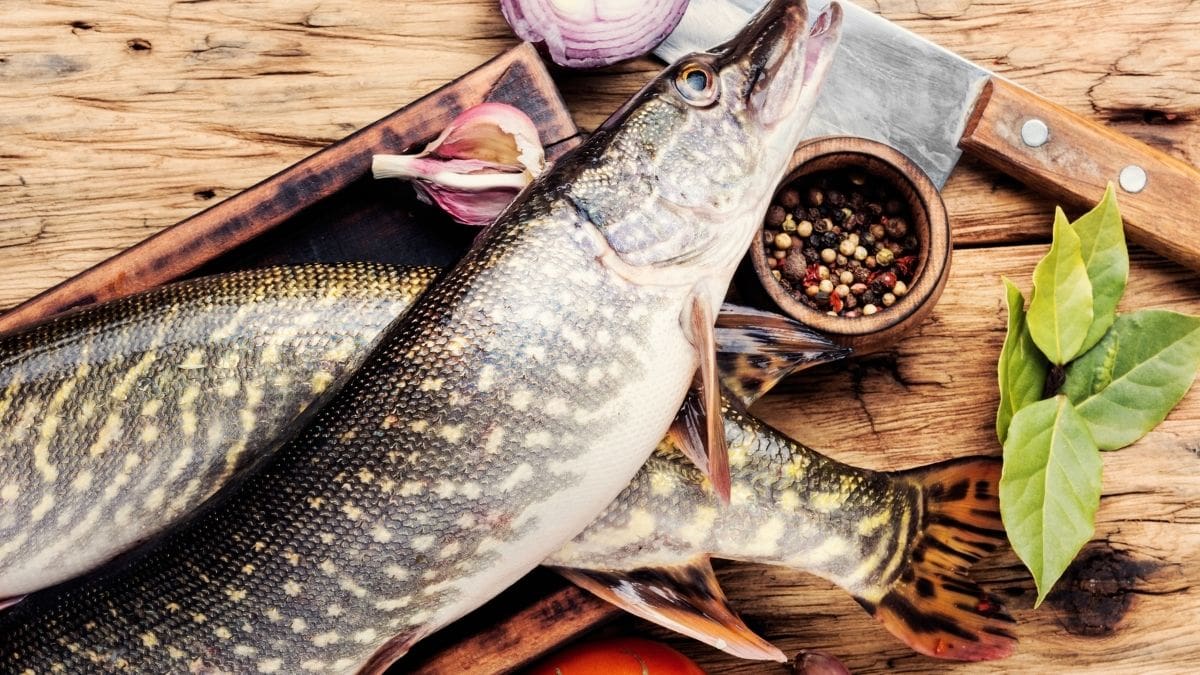 When we think of fish dishes, tilapia, salmon, and tuna typically come to mind. However, they’re far from the only types of fish out there that you can enjoy.

One type of fish that’s particularly delicious is pike. And, with seven unique varieties of pike out there, you can enjoy tons of delicious flavors!

In general, pike has a firm, white meat with a mild flavor. You won’t find many bones in the fish, which makes it perfect for soups or mousse based dishes.

Before we dive right into how to eat pike, let’s talk a little bit about these fish in general. Pike is a famously fast fish, that can reach speeds of up to 10 miles per hour. Despite their fast speed, however, they’re pretty big fish.

Pike is also a very feisty fish, and will put up a good fight for any angler trying to catch one. Their bright teeth and flashy yellow eyes make them a pretty ferocious-looking opponent, too!

There are seven different varieties of pike, all of which are freshwater fish. While their fishing season is from October to March, they’re a farmed fish so you’ll have no problem getting your hands on them throughout the rest of the year, too.

Pike and the Problem of the Y-Bone

If you’re going to eat pike, you may find that people complain about the Y-bone. Pike have a bone in the shape of, you guessed it, a Y that can be difficult to chop out if you’re not familiar with the task.

To remove this bone, you’ll want to watch an experienced angler at work. He or she should be able to remove the Y-bone with no trouble, which will get all the bones out of the pike and make for an easy eating experience.

How to Prepare Pike

There are tons of different ways that you can prepare pike, and all of them taste delicious. If you want a briny flavor, opt for pickled pike, or if you prefer a mild and fresh taste, brush it in a cajun dry rub.

What’s great about pike is that most recipes are pretty straightforward. You can throw them in a deep fryer or whip them into a delicious baked recipe and both will be extremely enjoyable.

One of the most popular ways to prepare pike is to bake it. If you want a truly unique pike dish, we recommend freezing the pike for about a week before cooking it. This leads to a more even and faster cooking process and also helps the meat to firm up better.

If you’re not looking for a dish that tastes strong, you can soak the pike in milk before freezing it. This helps remove some of the fishy flavor and creates a more mild taste when you do bake it.

In terms of herbs, dill, lemon pepper, black pepper, and cayenne pepper are a few favorites. Parsley and fresh lemon also taste great as sides and toppings for some baked pike!

There’s nothing quite like a fish fry up, and pike is a great meat to use to make one! When making a pike fish fry, grab a cajun cornmeal blend or a basic cornmeal blend. Place the meal in a bowl and set aside.

Then, clean the fillets thoroughly. Make sure to remove any large bones from the fish before cutting it into squares and rolling it in the cornmeal blend.

Next, cook the fish in hot oil. Just be careful not to overcook the fish. Pike tastes best when it’s just barely cooked, as this helps bring out its flavor.

Once the fish is done cooking, dip it in some ketchup, barbecue sauce, or tartar sauce. Whichever you choose, you’ll adore this indulgent dish.

How to Store Pike

While many people immediately assume that fresh fish tastes better, that’s NOT the case with pike. In fact, if you purchase pike fresh, you might be best off throwing it in the freezer for a couple of months before you eat it!

Fresh pike will keep in the refrigerator for 3-5 days. In contrast, frozen pike can be stored in the freezer for months at a time. When you remove pike from the freezer, allow it to thaw fully before you cook it.

Once you’ve cooked the fish, you can safely refreeze your prepared meal. It will keep for another 2-3 months in the refrigerator with no issues.

Do you still have a couple of questions about pike and what it tastes like? If so, check out these answers to some common Q&A’s about this fish.

When most people think of fish, they immediately think that they’ll have a strong, ocean flavor. The good news, however, is that pike is quite a mild fish. Although you can tell you’re eating fish, its flavor isn’t overpowering and is a good choice for people who don’t like strong flavors.

How is pike sold?

If you’re looking for pike at the supermarket, you’ll be pleased to know that you can buy it both fresh and frozen. Fresh pike is sold by the pound and can be cut into whatever sized filets you like. In contrast, frozen pike is sold in pre-cut fillets, usually four to six per package.

What tastes better, pike or walleye?

Many people confuse pike with walleye because they have fairly similar flavor profiles. In fact, the two taste much the same, except that walleye has a slimier texture than pike.