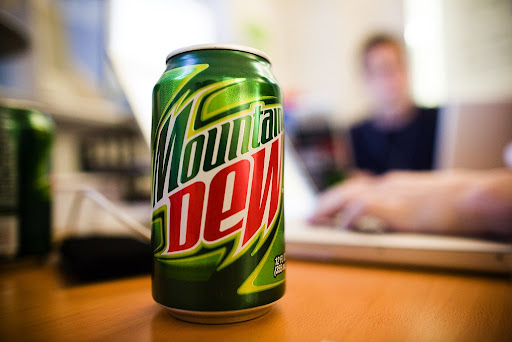 Want to know what Mountain Dew tastes like? This soda-like drink has been around for over 80 years and is available in several trendy flavors. Let’s take a closer look at what Mountain Dew is, what it tastes like, and the potential benefits and drawbacks of drinking it.

What Is Mountain Dew?

If you haven’t had Mountain Dew before, you may be wondering what all the fuss about the taste of this drink is. Mountain Dew (or Mtn Dew as it’s widely known) enjoys a longstanding history ever since it was created by the Hartman Brothers in 1940. The term “Mountain Dew” is slang for moonshine and comes from an old Irish folk song.

Its high sugar and caffeine content combined with a unique flavor makes it popular amongst the younger generations. From gamers to skateboarders to adrenaline junkies, many enjoy the energy boost they get from the unique taste of Mountain Dew. It’s safe to say that Mountain Dew is one of the most hyped-up soft drinks all over the world.

What Are the Different Mountain Dew Flavors

Since it first came out in the original lemon and lime flavor, Mountain Dew has been through some serious evolution. Nowadays, there are several different Mountain Dew flavors to choose from, including:

Nothing can deliver you a greater Mountain Dew kickstart than drinking it out of the can or bottle, especially if you are getting it from the likes of Code Red. If you are not in a hurry, you can enjoy your favorite Mountain Dew’s unique flavor profile by sipping it through a straw.

Invite your friends for some Baja Blast, mix any other flavors into your tea, root beer, or use it as a whiskey mixer, as it was originally intended. You may also choose to focus on the eye-catching color and aroma of each Mountain Dew product. Feel free to create new flavors and color combinations.

Out of all sodas, Mountain Dew products contain the highest amount of caffeine, phosphorus, and sugar. Even the sugar-free versions have unusually high levels of artificial sweeteners in them. Most versions also contain high levels of sodium. Because all these elements can contribute to disease development, it’s best to consume this drink only occasionally.

That said, having a Mountain Dew kickstart from your Code Red from time to time won’t hurt you. Neither will drinking its diet versions, like the orange soda flavored ones, which can be a great replacement for other sugary drinks. Keep in mind that the Mountain Dew brand isn’t the only highly caffeinated soft drink on the market.

But it’s the only one that also contains vitamins and antioxidants coming from real fruit juice. In fact, each Mountain Dew color is derived from a combination of artificial coloring, herbs, and fruit.

However, this juice also has real sugar, which means you can only get the health benefits if you consume them in small to moderate quantities. Plus, the healthier versions are typically limited, more expensive, and aren’t available at most convenience stores like the regular versions.

What is The Original Flavor of Mountain Dew?

The original Mountain Dew created in the 1940s had a tangy flavor and was similar to a citrus-flavored soda. Since it was caffeine-free, it didn’t have the strong Mountain Dew kickstart most modern versions have. While this original flavor still exists, its formula has been revised several times and become much sweeter, resembling a carbonated fruit juice.

Is Mountain Dew Similar to Sprite?

Not exactly. While both have a citrusy taste, Sprite resembles lemon-flavored water, Mountain Dew is a mixture of lemon, orange, and lime. In addition, Mountain Dew has a lot more calories and carbohydrates, not to mention the large amounts of caffeine that Sprite doesn’t have.

Why Is Mountain Dew the Worst Drink?

Due to its poor nutritional content, Mountain Dew is considered one of the worst soft drinks in the beverage world. Its high fructose corn syrup content is associated with a broad range of health issues, from tooth decay to diabetes.

Prolonged consumption of the heady amount of caffeine in Mountain Dew can lead to anxiety and other mental and neurological disorders. While Diet Mountain Dew has fewer calories, it’s still highly caffeinated, which makes it an unhealthy diet soda.

Now that you know what each version of Mountain Dew tastes like, you can easily choose the right one for you. Or, go out and experience each unique Mountain Dew flavor one by one. You never know which one will become your favorite.