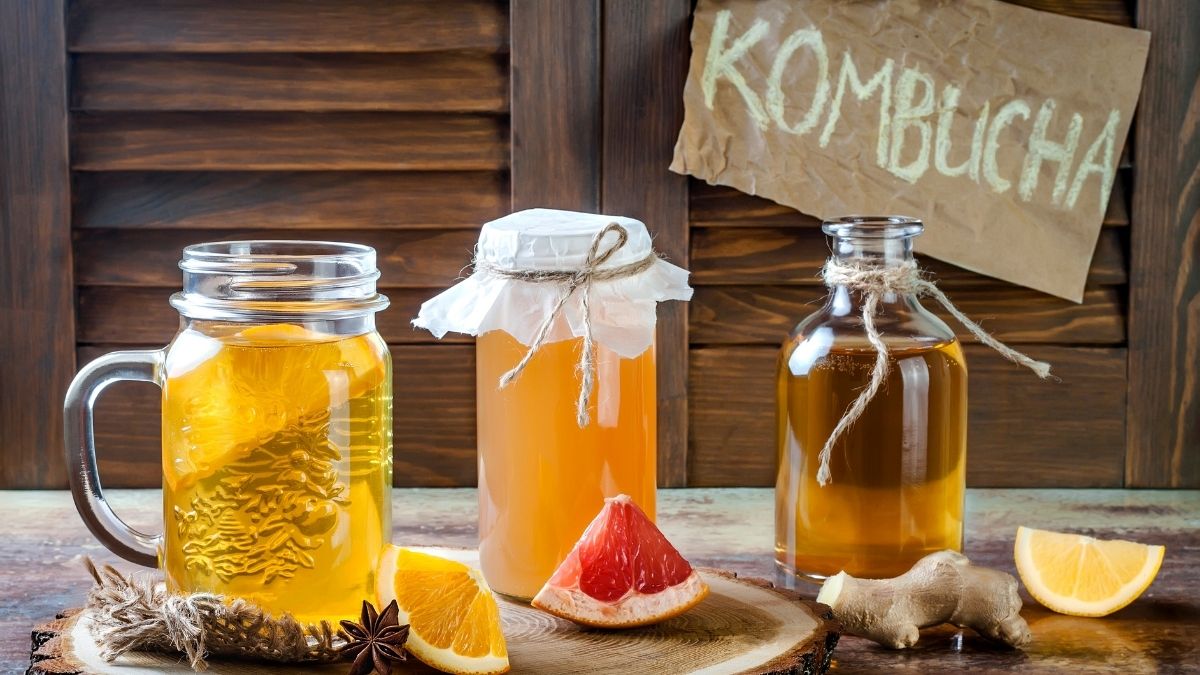 Many of us enjoy sipping on an ice-cold soda during the hot summer season. What most of us don’t love is the hundreds of calories that come with our favorite drinks.

One healthy, low-calorie alternative to soda is kombucha tea! This type of tea has the same fizziness as soda but isn’t packed with sugar nor is it sickeningly sweet.

Kombucha is a fizzy and slightly sweet beverage with definite notes of citrus. It’s quite a tart beverage and doesn’t taste at all like a traditional cup of brewed tea.

Kombucha is a sweet-and-sour, fizzy beverage that’s made out of tea. It’s well-known as a drink with tons of health benefits, with many people saying that it prevents hair loss and can even be used as cancer or AIDS remedy. However, there isn’t any evidence to back up these claims so you should be careful.

Despite the fact that kombucha gained popularity in recent years, it’s far from a new invention. In fact, kombucha has been around for thousands of years!

The first time people recorded brewing kombucha was in ancient China. From there, the drink spread to Japan and Russia. Russia made the drink even more popular, and by the 20th century, it had spread to the rest of Europe.

In the last ten years especially, sales of the drink boomed in the United States. Today it’s widely enjoyed in hipster culture as well as in health and fitness communities.

Kombucha consists of just a few basic ingredients: sugar, yeast, and black tea. To make the tea, you’ll mix the three ingredients and then set it aside for at least a week.

While the tea is sitting out, acids and bacteria begin to form in the drink. The drink also ferments, creating a small amount of alcohol. This same process is used to make kimchi, sauerkraut, and yogurt.

Once the kombucha tea is ready, you’ll notice that the mixture of acids and bacteria forms a film that sits on top of the liquid. This film is called a symbiotic colony of bacteria and yeast, or more commonly, a SCOBY. You can then use your SCOBY to brew even more kombucha tea.

If you ever sit down to sip on a cup (or bottle) of kombucha tea, you’ll instantly notice that it has a fizzy flavor. The fizziness is the same sensation as you’d find in soda water or in your favorite soda.

Aside from the fizziness, you’ll notice that kombucha has a sweet-and-sour flavor. There are notes of lime and citrus in the drink but also a definite tartness. However, the drink is still slightly sweet, making it a pleasant and balanced drink.

There are tons of health benefits that go along with drinking kombucha tea. Let’s take a look at a few of the benefits of drinking this drink:

The bacteria that form when your SCOBY is growing produces many different bacteria cultures. Several of those cultures are lactic-acid bacteria, which serve as probiotics in the body.

Probiotics are important for maintaining a healthy gut. They boost digestion, decrease inflammation, and can even help with weight loss.

Kombucha Has Benefits of Green Tea

Another major benefit of kombucha is that it can be made out of green tea, imbuing the beverage with some of the same benefits. Considering that green tea is one of the healthiest drinks you can make, this is a great way to boost your overall health.

When you drink green tea kombucha, you can enjoy reduced belly fat, faster calorie consumption, and lowered levels of bad cholesterol. Plus, you can help better manage your blood sugar levels.

Antioxidants are substances that fight free radicals in the body and protect you from cell damage. Kombucha tea contains high levels of free radicals, which can help keep your body functioning at its finest!

The antioxidants found in kombucha are especially helpful in the liver. They may help prevent you from getting damaging disorders such as fatty liver disease and other health issues.

When you ferment kombucha tea, acetic acid is produced. Acetic acid is a powerful acid that kills bacteria and harmful microorganisms, ultimately keeping you healthier and preventing you from getting sick.

What’s more, kombucha tea seems to have an especially strong effect against Candida yeasts. Drinking kombucha is a great way to keep your body healthy and avoid unpleasant illnesses that the yeast causes.

Do you still have questions about kombucha? We’ve got plenty of answers for you!

Alcohol lovers can have their cake and eat it too by drinking kombucha beer. This type of kombucha is where the alcohol content has been stepped up to produce a more alcoholic kombucha. The flavor tastes just like regular kombucha but gives you a fun buzz.

While there are tons of kombucha brands on the market, you can also whip this drink up yourself! If you choose to make the drink at home, you’ll find that it tastes a bit like apple cider vinegar but much sweeter and with the fizziness of soda water.