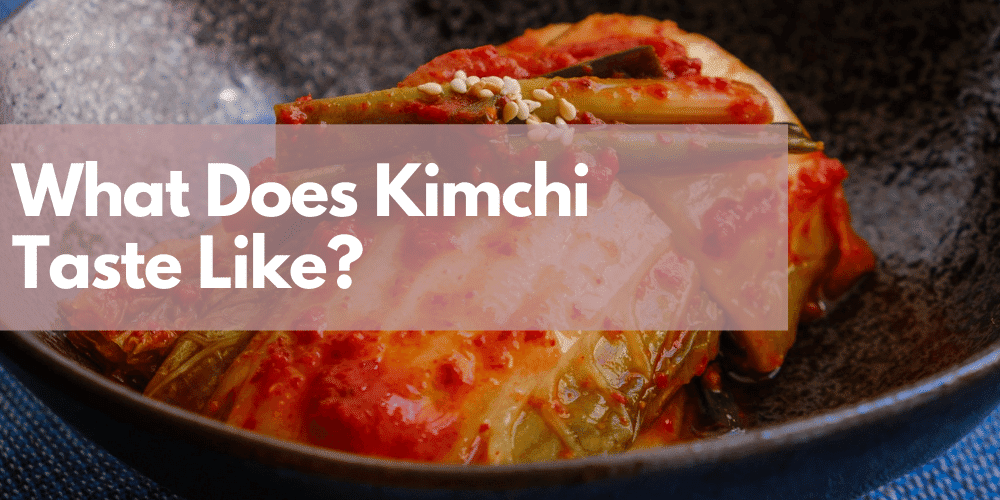 If you keep up with Korean dramas and series, you must have seen the actors binge eat kimchi. So let’s find out what does Kimchi taste like.

I mean, it is a Korean staple dish, so there’s no doubt it is eaten so much across the Korean province. But, with the growing popularity of this dish and Korean culture, in general, kimchi is now readily available in supermarkets and restaurants.

As enticing as it looks, kimchi has a very strong taste and flavor, one that I realized when I tried it for the first time. If you are wondering how the traditional pickled and fermented cabbage from Korea tastes like, scroll down further.

Kimchi is a traditional Korean pickled and fermented cabbage, which is served as a side dish or enjoyed as a snack or in the main course too.

The dish consists of a combination of vegetables including crisp napa cabbage, chopped garlic and red chillies, pepper, salt, and chilli powder.

Aside from cabbage, kimchi can also be made with radish, carrots, cucumbers, and scallions. Cabbage kimchi is the most common variant that is found globally.

With the rising popularity of this fermented dish, it is commercially available in the grocery stores and supermarkets and is generally relatively inexpensive.

But, given how accessible the ingredients are, making your own batch of kimchi is not tough at all.

What are the Main Ingredients in Kimchi?

A traditional batch of kimchi is made with several ingredients. Given how distinct the flavor is, each ingredient adds its distinctive taste and flavor to the dish.

Some of the primary ingredients include:

The first component of kimchi is the vegetable that needs to be pickled and fermented. Generally, people use cabbage, radish, or cucumber as the centerpiece.

The distinct spicy kick and the bright red appearance of the kimchi is all thanks to this ingredient. Generally, the spice level ranges from moderate to too spicy so that you can adjust the pepper powder according to one’s preference.

The combination of soy and fish sauce adds a more umami flavor to the dish. If you enjoy a more savory taste, this is what brings that flavor. The famous Thai street food delicacy – Pad Thai, also has an umami flavor. Find out if it is easy to reheat Pad Thai.

Koreans are crazy about crushed and chopped garlic, so the same is used in abundance in kimchi too. Adding garlic helps with the fermentation process and adds a very distinct and pungent flavor to the dish.

The combination of salt and sugar is a must in every kimchi recipe. More than the taste, the salt helps in faster fermentation of the vegetables and helps the vegetables stay crispy and crunchy even after being brined.

Kimchi has a very complex taste and flavor, one that varies depending on the ingredients used. A traditional Baechu kimchi with the cabbage has a different taste than the radish or cucumber kimchi.

If you want a complete breakdown of the taste depending on the ingredients, the time of fermentation, and the vegetables, I have got it covered for you.

The sweet and salty taste is mainly because of the blend of fish and soy sauce. Other than that, the salt and sugar also add to the savory taste. Depending on the salt to sugar ratio, some have a sweet taste and some have a salty taste to it.

If you are getting an umami taste to the kimchi, it is likely because of the fish sauce. Some varieties of kimchi have fermented fish paste in it, which further enhances the flavor of the dish.

Vegan kimchi that doesn’t have fish products in it, it does have a lot lighter and fresher taste to it.

The spicy and the pungent flavors in the kimchi is because of the chillies and garlic. There are different grades of spice in a kimchi, ranging from moderate to extreme. The amount of red chilli flakes, powder and paste define how spicy the kimchi will be. The red chillies also give this dish the characteristic red color.

What are the Best Ways to Eat Kimchi?

Now that you know about the basics of kimchi, the next thing to know is the ways of eating it. From eating it as a condiment to including it in the main course, this traditional Korean dish can be eaten in several ways.

I am going to share some of the easiest and yummiest options.

Also known as Kimchi Mandu, this dish includes a mixture of meat mince and chopped kimchi which is wrapped in a dumpling wrapper and steamed or fried as a potsticker. It is traditionally served with a side of sweet soy sauce vinaigrette.

It is a staple dish eaten all around Korea. All you need to do is steam some rice and keep it aside. Heat a wok and add some chopped garlic, scallions, and shallots, and fry until fragrant. To that, add some chopped bacon or spam and add the chopped kimchi as well. Once everything is fried and flavorful, add the steamed rice and some seasonings as per your taste.

This dish is my go-to when I am in a rush or feel too lazy to cook up an entire meal. All you need is 15 minutes, and the dish is good to go.

Kimchi Stew, also popularly known as Kimchi Jigae in Korea, is a staple warm and comfort food. It has chunky pieces of pork/chicken along with tofu and chopped pieces of kimchi in it. The stew or soup is often paired with some rice on the side.

This dish is perfect if you meal prep for the week.

If you are tired of eating the same sweet pancakes like me, I would suggest you try this one out. A kimchi pancake is a savory twist to your traditional pancakes but taste just as amazing. To a standard pancake recipe (minus the sugar), add some chopped kimchi and kimchi juice and make a thick batter. Fry it like you would a regular pancake and you can either eat it by itself or serve it with some ketchup on the side.

Udon is a traditional noodle from Korea. Unlike Ramen, Udon is made with eggs and has a thicker and more chewy texture. Load up the dish with some chopped bacon and meat of your choice and a fried egg on top, and you have yourself a student favorite dish from Korea.

Is Kimchi Similar to Sauerkraut?

Although both kimchi and sauerkraut are made with fermented cabbage, they have a lot of differences when it comes to the taste and appearance.

Kimchi has a spicier and more flavorful blend with garlic and shallots in it. It also has a more crunchy texture to it as the cabbage (or any vegetable) is ripped and not finely chopped.

Sauerkraut, on the other hand, has a blend of mild flavorings, including caraway and dill. It is mainly made in German cities and has a lower antioxidant content in comparison to kimchi.

Both these dishes are excellent for your gut as they are loaded with probiotics from the fermentation.

How Long Does Kimchi Last for?

If you are getting store-bought kimchi, it will usually last for 3-6 months when refrigerated. Additionally, for better precaution, always keep the temperature of the fridge under 4°C because a warmer temperature can spoil the dish and make it inedible.

If you witness the growth of molds inside the jar, I’d suggest throwing it out and opening a fresh batch.

As popular kimchi is becoming, know for a fact that it’s an acquired taste. If you don’t enjoy eating pickles, you’d probably not like kimchi. I’d always suggest you try this with some rice and meat before you eat it just by itself as a condiment.

More than the taste, it is incredibly healthy because of the low calories, high probiotics and antioxidants in them. Once you start liking the dish more after eating it multiple times, try and make your batch at home.