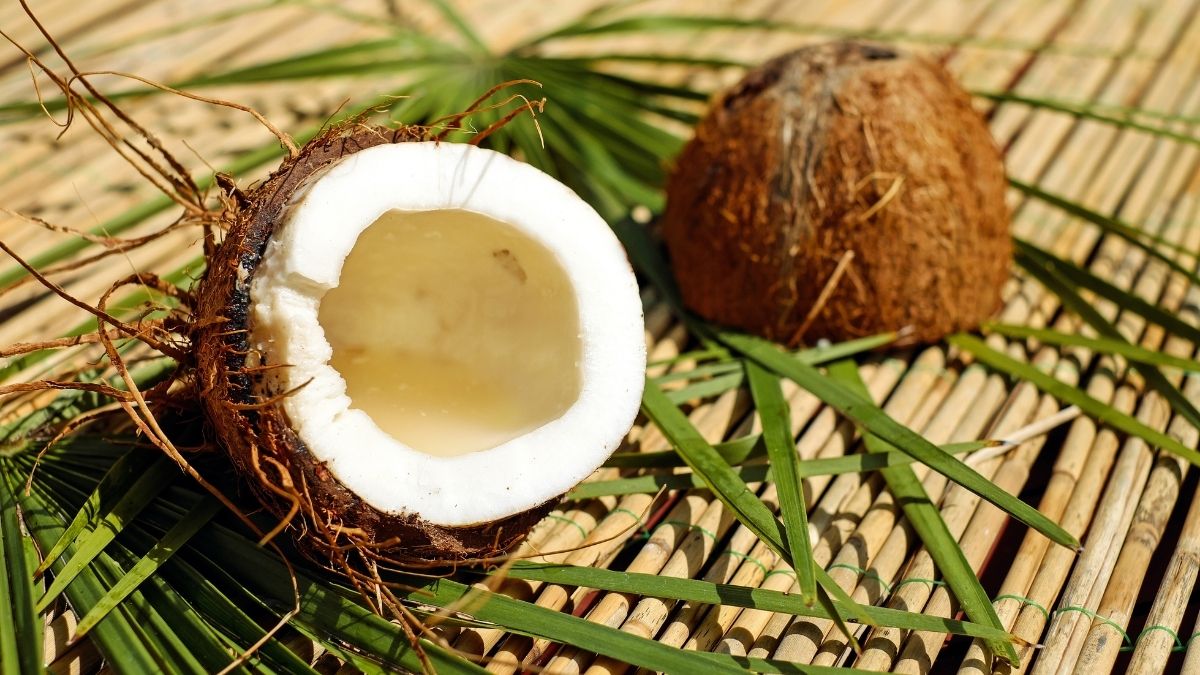 Most of us use packaged, shredded coconut in baking. We use it to make cakes, tarts, cookies, and even granola bars! We might also recognize coconut flavors from some of our favorite cocktails, such as the piña colada.

However, you don’t always have to eat coconut in these processed and prepared dishes. You can also enjoy fresh coconut, which has a very different flavor from its processed counterparts.

Fresh coconut tastes nutty and refreshing. It has a slightly sweet and very mild flavor, with a bit of a tangy aftertaste.

What Is the Texture of Coconut?

If you’re going to eat coconut, you can expect it to be creamy. However, the meat of the coconut varies depending on what type of coconut you sit down to munch on.

Mature brown coconuts, for example, have heavy and dense coconut meat. In contrast, Thai coconuts have a gelatinous texture and are easy to scoop out of the skin.

Can You Eat Coconut Skin?

If you purchase a fresh coconut, you’ll notice that it’s surrounded by thick, brown, hairy skin. The skin has a texture similar to that of parchment, which can be reminiscent of almond skin.

While the skin might not look appealing, it’s certainly not unhealthy. In fact, coconut skin is full of fiber–it can give you tons of health benefits such as improving your digestive system!

For anyone planning to eat coconut skin, just be prepared for a dry meal. You can mix the skin into a smoothie to make it more palatable and easier to eat.

How to Open a Coconut

If you buy a fresh coconut, you’ll immediately notice that the fruit is encased in a thick and hard shell. To actually get to the meat of the fruit, you’ll need to break open the shell first.

To open a coconut, start by poking a hole in the top of the fruit. You’ll notice three small indentations on the top of the coconut. With a sharp knife, poke each eye to see which is the weakest.

When you find the eye that gives to the knife the fastest, poke the knife through the hole and create an inch that’s about ½ an inch wide. If you’re struggling with the knife, you can use a screwdriver or a metal skewer to poke the hole.

After you’ve opened the coconut, you’ll need to grab a glass. Place the coconut upside down over the glass, positioning it so that the hole is situated directly above the glass.

If draining the coconut water into the glass is too difficult, you can drain the coconut into a bowl. Just keep in mind that you’ll have to hold the coconut up while it drains if you use a bowl, whereas with a glass you can rest the coconut on the rim of the cup.

Once the coconut has completely drained, allow it to sit for a few more minutes so you can be sure that there is no remaining liquid. Then, wrap the coconut in a tea towel and use a mallet to smash the coconut shell.

Open the towel and remove the pieces of coconut. You can peel the skin of the coconut to make it easier for you to eat all the fruit.

How to Tell When a Coconut Goes Bad

Because coconuts are encased in a thick, hard shell, it can be pretty tough to tell when a coconut goes bad. With a little experience and a trained eye, however, you’ll be able to recognize when it’s time to toss the coconuts in the garbage bin.

When coconuts are going bad, you’ll start to notice dark brown or purplish spots on the bottom of the coconut. While it’s fine for the fruit to show a little bit of color, if you notice a lot of color on the coconut it could be an indicator that the coconut is spoiled.

Another indicator that it’s time to toss your coconut is if you notice the water has changed color. Pinkish water is still good to eat, but brownish water means that the coconut is starting to go bad.

You should also keep your eye peeled for mold. If you notice any mold on the outside of the coconut, that means that it’s time to toss your coconut away.

Cracks in the coconut skin are another sign it’s time for your coconut to go. Cracks allow bacteria to get into the coconut and can cause the coconut to spoil quickly and even make you sick.

Do you still have lingering questions about fresh coconut? We’ve got a couple of answers to some of the most commonly asked questions.

While fresh coconut doesn’t necessarily taste better it certainly does taste different. Packaged coconut usually gets processed with sugar, sweetening the fruit and creating a very different flavor than that of fresh coconut.

Why is fresh coconut not sweet?

Many people expect fresh coconut to be sweet if they’re used to packaged coconut. However, coconut isn’t sweet because it doesn’t contain a high sugar content, whereas packaged coconut is usually processed or rolled in sugar.