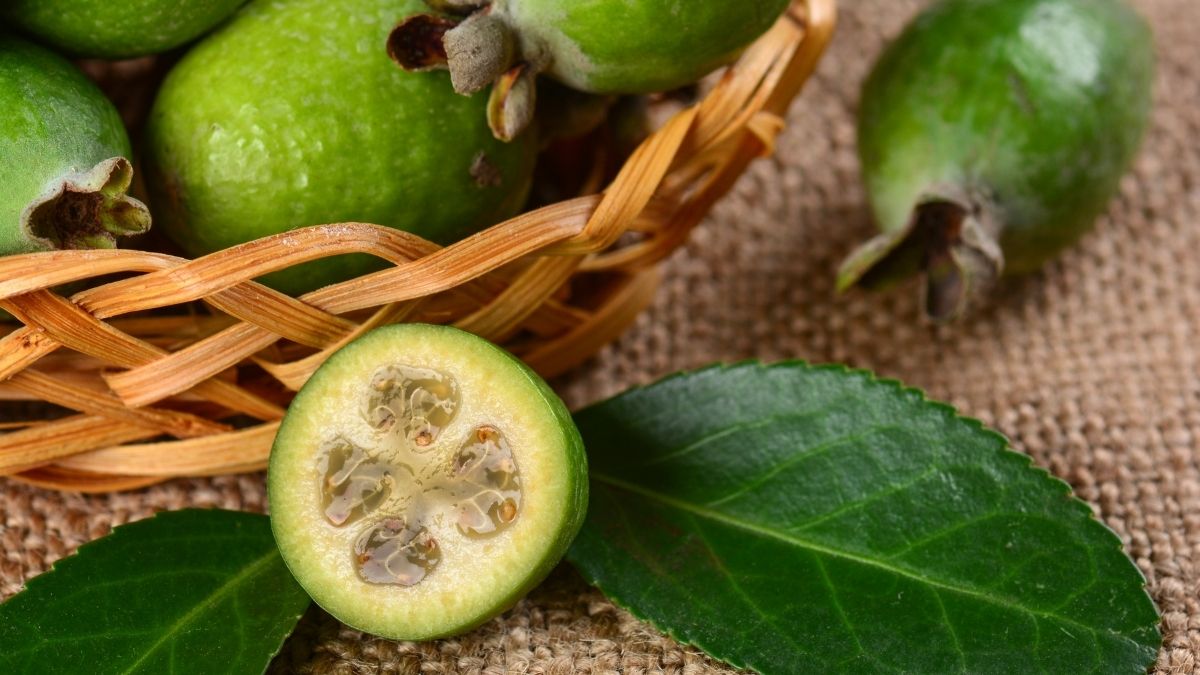 This unique fruit tastes flowery and light. Feijoa has notes of strawberry, guava, and pineapple.

Feijoa, sometimes referred to as guavasteen or pineapple guava, is a small tree in the myrtle family. Feijoa is related to the guava fruit and is native to various parts of South America, including Brazil, Argentina, Uruguay, Colombia, and Paraguay.

Feijoa is grown in dry, mild climates. Although it’s native to South America, the fruit was introduced to Europe in 1890 and to California in 1900. Since then, growers in both these parts of the world have continued to grow the fruit.

The fruit is most popularly sold in Azerbaijan, Iran, Georgia, Australia, and New Zealand. It’s still common in South America but is actually easier to find in the aforementioned countries.

Feijoa trees are roughly 15 feet tall and have dark green leaves. The flowers of the tree are large and have a bright purple interior and white petals.

The fruit itself is oblong and grows to about 2 inches. It has a dull green color with flecks of crimson on the skin. When you slice the fruit open, you’ll find a translucent and tender pulp.

So, what does feijoa taste like exactly? The cream-colored pulp of this fruit has an aromatic flavor. It tastes like a cross between guava, starfruit, pineapple, and pear.

Feijoa’s texture is grainy, but don’t let that scare you off! Even though the fruit starts out grainy, it gets more jelly-like the closer to the center of the fruit you get.

Overall, feijoa is made up of several different flavors. The dark green skin is sour, the grainy fruits are tropical and slightly citrusy, and the jelly-like parts of the fruit are sweet and floral.

Feijoa is quite a nutritionally balanced fruit. The fruit contains several important vitamins, nutrients, minerals, amino acids, and lipids, including:

Thanks to the many nutrients contained in feijoa, these fruits can be especially beneficial to the body.

For one, feijoa contains 16g of dietary fiber. All that fiber helps move things through your digestive tract, keeping your stomach and intestines clean and healthy.

Additionally, feijoa is low on the glycemic index score. That means that it’s a safe fruit to eat even if you have Type II diabetes. And, eating this fruit could potentially help you avoid developing Type II diabetes in the first place thanks to its ability to help regulate blood pressure and blood sugar.

Lastly, the antioxidants contained in feijoa have been linked with a reduction in neurological issues. Eating feijoa can help you avoid developing memory loss and cognitive decline.

Where Can I Buy Feijoa?

Feijoa is in season from March to June, making that the best time to go hunting it down in your local grocery stores. In many countries, feijoa is easy to find in local supermarkets during this time of year.

In the United States, it can be a bit more difficult to get your hands on feijoa. Specialty food stores such as Whole Foods and Mom’s Organic Market are the best places to look if you’re wanting to buy feijoa.

How to Eat Feijoa

So, you’ve managed to get your hands on Feijoa. Let’s take a look at a few ways that you can eat this fruit now that it’s in your possession!

The easiest way to enjoy feijoa is to eat it raw. To do so, simply slice the fruit in half and spoon out the insides! The skin of the fruit is edible, too, meaning that you can also just chomp into it much like you would an apple.

If raw feijoa sounds too exotic for you, you can also make it into a juice. To make juice out of feijoa, just cut the fruit into chunks and blend it with either milk or water and a bit of sugar.

Note that if you use the skin in your juice it will have a green tint. The skin will also make the flavor of your juice tarter than if you use only the pulp of the fruit.

Feijoa tastes great in cocktails thanks to its lemony flavors. One popular Colombian cocktail called sabajón is made out of feijoa. The cocktail is similar to eggnog and is a great way to relax and unwind in the evening.

Is feijoa the same as guava?

Even though feijoa is sometimes called pineapple guava, feijoa and guava are not the same fruit. Guava is in the same family as feijoa but contains very different nutrients and minerals from its greener cousin.

What does feijoa mean?

Even though it sounds like an exotic word, feijoa is simply the name of this tropical fruit. It has no other meaning outside naming the fruit.

How do you know when a feijoa is ripe?

Because feijoas do not change color when they’re ripe, they can be tough to identify as ripe or unripe. To check if a feijoa is ripe, feel the fruit. It should be slightly soft but not squishy. If the fruit is unripe, it will be hard and tough.

What goes well with feijoa?

Since feijoa is a tart fruit, it goes best with sweets. Many people enjoy making it into jam or using it fresh as a topping for ice cream, cereal, or yogurt.