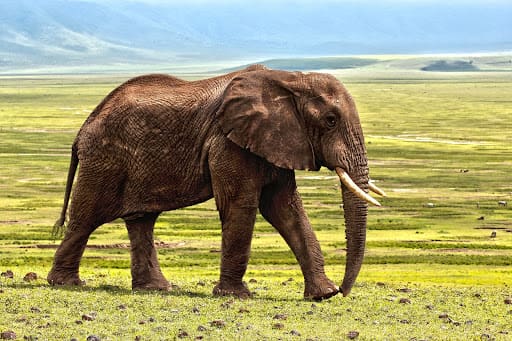 Apart from the usual beef, chicken, and pork, the world is full of a plethora of other animals with their own unique flavors and tastes. This article will discuss what elephant meat tastes like for those who have wondered. Before starting, however, it must be noted that eating elephant flesh is illegal in most parts of the world and is not recommended.

The taste of elephant meat

From the few who have tasted elephant, the flavor is described as being very gamey with a strong taste of red meats. Moreover, it is considered to taste similar to venison. Usually, onion and garlic are used to mask some of the excess flavors.

Generally, it is almost impossible to eat elephant meat as it is not exactly available in supermarket stores or online. However, humans, especially in Africa, have eaten elephant meat for centuries.

This is down to the fact that elephants used to be hunted specifically for the ivory trade. Often, after ivory hunts, the hunting party may use some of the edible parts of the animal for sustenance. This form of wild animal meat is called bushmeat and includes other wild creatures as well such as hippo meat.

In some parts of the continent African elephants are still hunted to this day, albeit illegally. In many countries, killing elephants is banned, however, poachers still take the risk for the ivory. During this process, in order to supplement incomes, other edible parts of the elephant are also harvested, leading to their eventual sale in small markets in rural villages. This practice occurs notably in Central Africa.

Thus, thanks to these sources, there are quite a few people who know what elephant tastes like. One thing to note, however, is that a lot of the reports on what elephant meat tastes like is a personal opinion of those who have consumed it. Due to this, there may not be a way to verify it with absolute certainty.

Due to this, to cook elephant meat, there is a strong emphasis placed upon additional ingredients to help mask some of the gamey elephant taste. Cayenne pepper, some sort of sauce, or flavor vegetables may all be cooked together with the elephant in order to combat some of the flavor contained within its natural fat.

This fact also makes elephant much more of an acquired taste than eater game foods and requires some commitment to eat. It certainly does not compare in taste to beef, lamb, and other red meats that humans have grown accustomed to as a source of delicious food.

Why is eating elephant illegal

One of the main reasons that it is so difficult to use elephants as a source of protein is simply down to the laws surrounding the animal. In many parts of the world elephants are a protected species. Moreover, in much of their native ranges in Africa and Asia, these animals are endangered thanks to a series of issues facing them.

Firstly, there is the fact that their habitat has reduced significantly in the past centuries due to human expansion and encroachment which has led to elephant numbers dwindling in the wild.

Moreover, the ivory trade has also decimated elephant populations and led to hundreds of thousands of these beautiful creatures being killed over the years so that their tusks could be turned into ornaments and pseudo-medicine.

These factors have led to a large decrease in the number of elephants present throughout the world. Moreover, in some parts of the world where they once used to roam, these creatures have now gone totally extinct.

Lastly, it is also worth noting that elephants are not farmed and cannot be due to the long time needed for them to reproduce. Moreover, wild elephants are more valuable as tourist attractions than they are as meat. For these reasons, it is not possible to legally be able to eat this animal. Moreover, we would not recommend it either considering the fact that alternatives like beef, chicken, and lamb all taste much better and are easier (and more legal) to find.

It can be noted that elephants, as majestic and cool as they are, do not make for good food as they are not particularly tasty when cooked. This is down to the fact that they taste like much more gamier deer which makes their meat unpalatable to the vast majority of people.

Additionally, even if someone is able to make an edible dish out of them, that is only by using a plethora of other ingredients to mask the meat itself.

Moreover, it is worth noting that this animal is not even worth trying to eat. It has been a common target of hunting thanks to the desire for ivory which has decimated populations and left only a fraction of the numbers this species used to have.

Furthermore, the stringent laws making consumption of elephants illegal also pose a severe challenge to anyone wishing to consume this creature. At worst, you could be looking at a huge fine or even potential jail time for having tried out a steak that was not even particularly tasty.