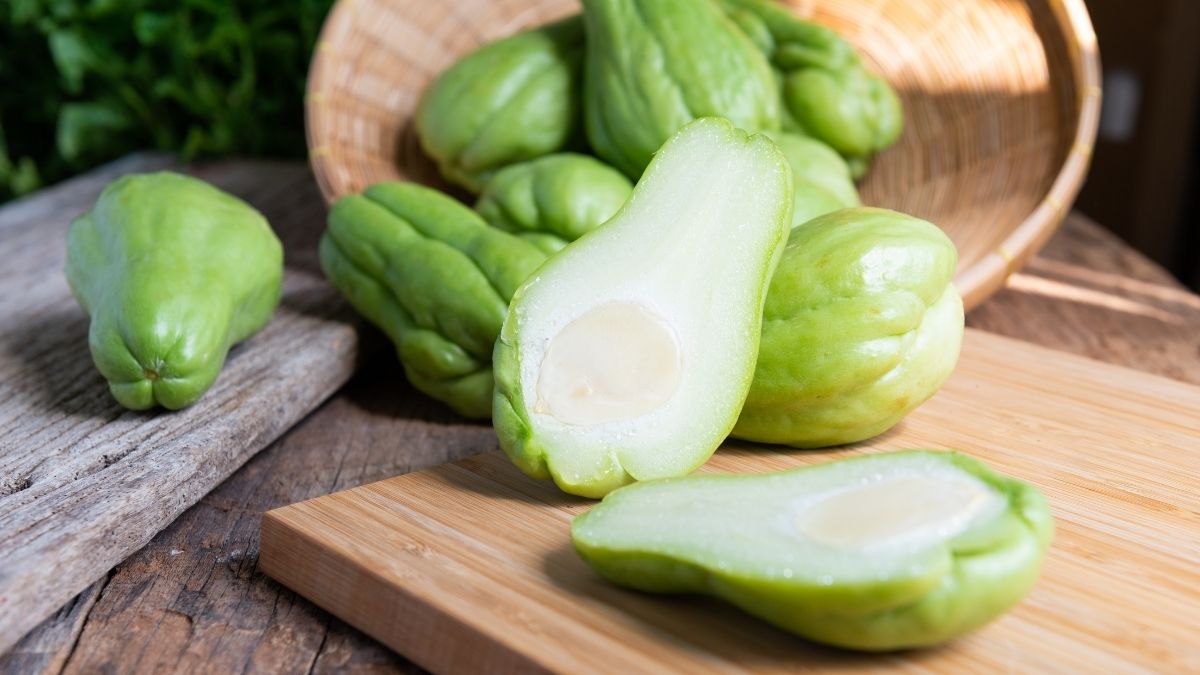 One such variety is the chayote squash. Chayote squash is a variety of squash that’s native to Mexico and enjoyed around Latin America and in the Southwestern United States.

Chayote has a mild flavor that tastes a bit reminiscent of cucumber. It has notes of butternut squash, but the flavor is slightly sweeter and has a bit of the taste of apple in it.

So, what is chayote exactly? Chayote is a type of squash that’s also known as a mirliton squash. The squash is technically a fruit, even though we often think of squashes as being vegetables.

Chayote squash is a perennial fruit that grows during the warm season and is a part of the gourd family. The green color of its skin and distinct pear shape has given it the nickname vegetable pear.

Chayote were originally cultivated in Mexico, but today are grown in tropical climates around the world. It’s mostly cultivated in Latin American countries, but you can find it in the US, Australia, and other Western nations.

If you want to try chayote squash for yourself, you might be surprised at its mild flavor. While it does have a squashy flavor, it tastes more like an Armenian cucumber than like the classic squash varieties we use in pumpkin pies and other Fall treats.

Chayote squash has an outer texture similar to that of jicama. When you slice it open, you’ll be greeted by a crunchy white flesh that tastes slightly sweet and has notes of apple in it.

Chayote squash has numerous minerals, vitamins, and nutrients in it that make it a particularly healthy vegetable (fruit😅). Here are some of the vitamins and minerals you’ll get when eating chayote:

How to Eat Chayote Squash

There are tons of different ways to eat chayote squash, which is probably why it’s become such a popular vegetable! If you’re going to munch on this delicious veggie, get inspired by these ideas on how to eat it.

Chayote’s crunchy texture makes it the perfect addition to slaws and salads! To prepare it in a salad or a slaw, just slice the chayote into matchsticks and throw them into your dish. We recommend peeling your chayote first so that it’s less chewy and more crunchy.

Do you love munching on pickles as a snack or adding them to burgers and hot dogs? Why not whip up a tasty variant using chayote!

To make chayote pickles, simply boil pickling spices, onions, vinegar, and sugar together to make a brine. Then, add a few sliced sticks of chayote and place the entire mixture in a jar. Let the chayote sit for at least a day or two before removing and adding to your favorite BBQ dishes.

You can make oodles of noodles with chayote! Similar to zucchini noodles, these are a great option if you want a lower-calorie version of our favorite Italian meal.

To make chayote noodles, simply spiralize the gourd. Then, saute the noodles with your favorite sauces or seasonings for a low-carb, low-calorie lunch or dinner.

There’s nothing quite as comforting as sipping on squash soup on a cold winter day. With chayote, you can make a unique squash soup that’s a little different from the classic one.

To make this dish, cook the chayote squash in chicken broth with a bit of garlic and onion. Then, pureé the mixture in a blender and serve it hot!

If you love stuffed peppers then you’ll adore stuffed chayote. To make this dish, simply cut the gourd in half and scoop out the fruit inside it. Mince the squash meat and mix it with ground beef, vegetables, and a bit of cheese.

Next, spoon the meat back into the chayote. Drizzle the dish with a bit of olive oil and then cook it in the oven until it’s soft and the meat is cooked all the way through.

Who doesn’t love delicious squash-based desserts like butternut squash casserole or a tasty pumpkin pie? Chayote is another squash variety that you can easily whip into a delicious dessert.

Do you gave to peel chayote?

Even though many people choose to peel chayote before eating it, you don’t have to! Every part of the chayote is edible which means that you can cook up chayote dishes without removing the skin first.

What does chayote mean in spanish?

The exact translation of chayote is “squash”. Even though the word chayote is considered Spanish, it actually originates from the indigenous Náhuatl language. In Náhuatl, chayote means “prickly squash”.

What is similar to chayote squash?

If you’re looking for something similar to chayote that you can use in your recipes you’ll be happy to know that there are plenty of options. You can use zucchini, yellow summer squash, crookneck squash, and pattypan squash.