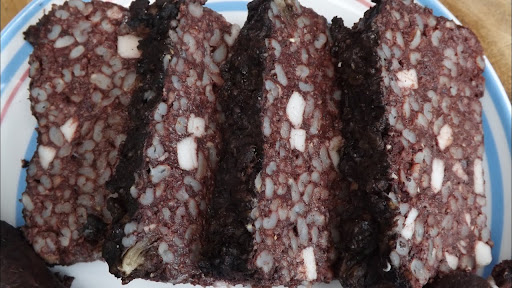 What is Blood Pudding?

Blood pudding, often known as “black pudding,” is a sort of sausage produced from the blood of animals. Although there are many different varieties, it is well recognised in many areas of the world in the setting of a traditional Irish or Scottish breakfast. Most cultures have some form of blood sausage in their history; however, the ingredients, taste, and final application might differ significantly.

Animal blood and some form of grain, commonly oats, wheat, or rice, are all that a sausage requires to be considered blood pudding. Casings are popular but not needed, and dried fruits and other spices are frequently used. A lot relies on the cook’s culture and the types of ingredients that are readily available.

Black pudding is a filling mashed blood sausage that is flavorful, dry, earthy, herby, and nutty. To give it a spicy flavour, seasoning and spices can be added. The pudding has no resemblance to blood, and you probably wouldn’t notice the blood if you didn’t know it was one of its ingredients.

Blood pudding, despite its name, isn’t truly a “pudding” at all. The name comes from the grains that are usually always added to absorb the blood. This description can be off-putting to some who are new with the dish or aren’t used to eating animal blood, and the sausage can take some getting used to. It is typically considered a delicacy by those who have grown up eating it or live in cultures where it is commonly prepared.

Almost every meat-eating culture has at least one type of blood sausage in its traditional cooking repertoire. This is due in significant part to the hard work of most butchers. There is frequently a lot of blood left over after meat has been split into edible bits. But remember it shouldn’t be eaten cold.

Blood has many beneficial nutrients, particularly iron, and can be pretty nutritious; yet, it is not usually very appealing. Combining it with sausage fillings and frying it into its own meat-like mass can be one way around that.

What Is the Taste of Sausage?

Sausages come in a wide selection of flavour profiles and variations from all over the world. Some are mild but intensely spicy, while others are stronger but have a powerfully spicy taste, and some are delicately sweetened with ingredients such as apple and maple syrup.

In contrast, others, such as blood sausage, have a strong mineral flavour. Fennel, curry powder, wine, peppercorns, paprika, ginger, and various other spices can be used to flavour sausage.

Blood pudding, in general, is a good source of iron, protein, and vitamin B12. However, it may or may not be considered a healthy food depending on how it is made. It may be pretty heavy in calories if it is packed with animal fat or other meaty tissues, as is customary.

Eating blood sausage raw or blood generally is generally not regarded as risky or harmful if cooked thoroughly; nevertheless, the underdone or partially raw pudding may contain harmful bacteria that can cause disease.

Blood Pudding In the UK

The most common ingredient in Irish and Scottish blood sausage is pigs blood, frequently enclosed in the pig intestine. It usually contains oats as the significant binding grain and raisins or currants. Many cooks add spices like cinnamon and nutmeg to the sausage to give it a sweet flavour that goes well with the savoury parts of the breakfast menu. If you’re looking for a new experience definitely try pigs blood. Although black pudding is not often served with an English breakfast, it is commonly seen on pub menus or snacks in many restaurants and taverns.

This sausage is made in almost every European country. Some, such as the German Blutwurst and the Spanish morcilla, are savoury and can be packed with different cured meats, onions, or potatoes and blood and grain.

Others blood puddings are meant to be sweet in nature. Cooks in several Nordic nations, for example, add apples or sweet lingonberries to their sausage preparations, and the pudding is frequently served alongside more sweet dishes such as applesauce or fruit reductions.

A lot relies on local customs and the kind of ingredients available. Almost any animal’s blood can be utilised; animals such as sheep, goats, and cows are the most popular, although duck and chicken can also be used. In the same way, oats are the most prevalent filler, but barley, rice, and corn can also be found in some regions.

Blood Pudding In the Americas and Africa

Blood sausages are the most popular in locations with significant ties to immigrant populations, much like those in the United States and Canada. For example, the European settlers who colonised most of the Midwest and Eastern Canada left a legacy of German-style Blutwurst, and Italian-style versions are popular in many regions of New York.

Cajun cooks in Louisiana frequently make their own version, based on a recipe provided by French settlers but modified to suit local ingredients and preferences.

Most sausages found in Central and South America are variations on the Spanish morcilla, with local food and livestock usually being used. Spicy blood sausages are famous in the Caribbean, and they’re frequently served fried with local vegetables; sweet potatoes and plantains may also be used in the stuffing.

One interesting fact is blood pudding is eaten in most parts of Africa with slight variations depending on what is available. The meal is often inexpensive, and it can serve as a “catch-all” for miscellaneous components or consumables.

We hope this article has enlightened you on what blood sausage or black pudding is. While it may not be the first thingon your plate, black pudding is a meal you won’t want to skip. With its great chewy texture and slightly sweet unique flavor it is a must-try.