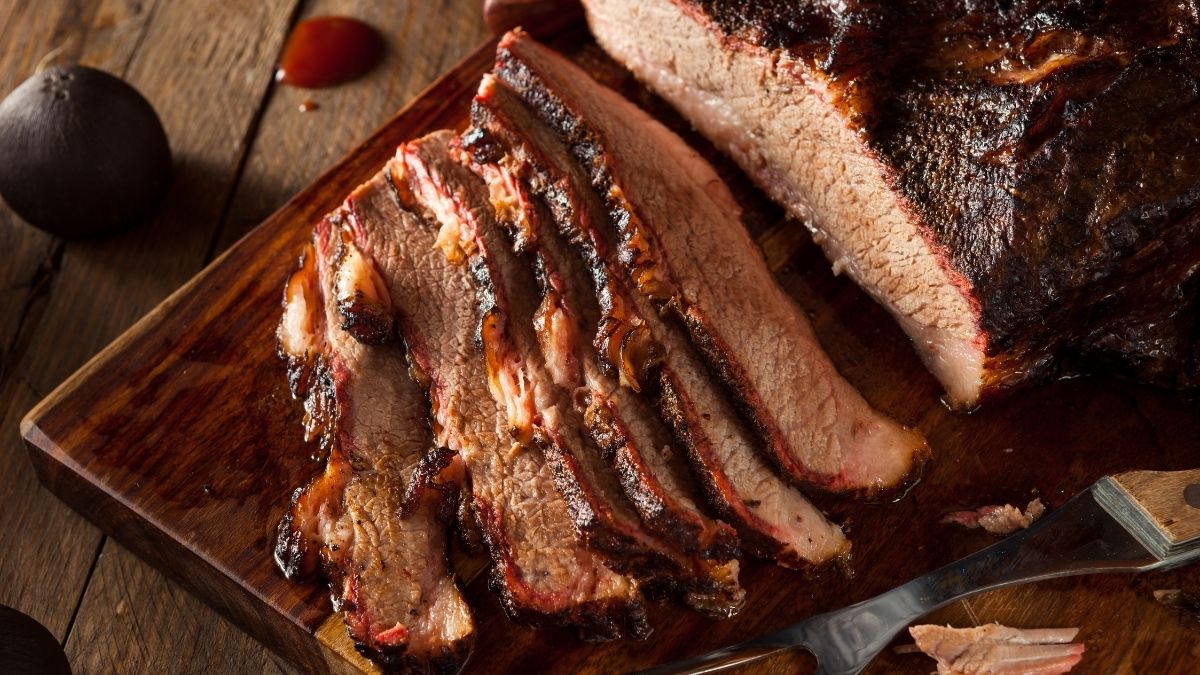 If you’ve ever gone to a fancy buffet, you may have come across a table where a butcher is slicing a lump of juicy, succulent-looking meat. Between the gleam of the knife as it slices through the buttery skin and the sauce oozing off the rump, the food looks pretty appealing.

This type of meat is called beef brisket, and it’s a delicious way to prepare a good cut of fresh beef.

When prepared correctly, beef brisket tastes beefy and juicy. It has incredibly soft meat, and depending on how you prepare it, will have smoky or briny flavors.

What Is Beef Brisket?

Brisket is a cut of beef that’s taken from behind the foreshank of the cow. It’s made up of the cow’s pectoral muscles and is the breast section located just beneath the first five ribs of the cow.

Brisket is usually a pretty large cut of meat, weighing between three and eight pounds. It’s rich in collagen, which makes the meat tough and flavorful.

Usually, because of its size, butchers will divide a cut of brisket in half. Then, they’ll sell the two halves as different pieces of meat.

If this description has got you curious about how the meat tastes, you might be surprised to find that the flavor depends a lot on how you prepare the meat. Smoked brisket has a smoky and moist flavor while braised brisket has a stewed, beefy flavor.

To get a better idea of what brisket tastes like, let’s take a look at a few key factors that influence the meat’s flavor.

The cooking method you use for brisket will help determine the flavor of the meat. When you slow cook the meat at a low temperature, you can really bring out the meat’s flavor and create a delicious dish.

Aside from the temperature and duration of your cooking method, there are a few different ways to cook the meat. Most people choose to either grill, braise, or smoke the meat.

When you smoke or barbecue the meat you’ll end up with rich, crispy, fragrant, and smoky meat. This cooking method has crunchy fat and is reminiscent of classic barbecued beef, only with a different flavor.

If you braise brisket, on the other hand, you’ll cook the meat in broth, juice, or beer. The moisture from the liquid creates humidity that causes the meat to cook faster than in the aforementioned methods. The flavor is much juicier and fattier than that of smoked or barbecued brisket.

Brining, marinating, and smoking brisket are other factors that influence the flavor. Each one of these methods infuses your brisket with a flavor that can make or break the steak.

Smoking, for example, will infuse flavors depending on the type of wood you use. The best flavors for smoking are oak, hickory, or apple because of the extra flavor they imbue your brisket with.

Sweet and hot marinades can also add unique flavors to your beef. The longer you marinate a brisket, the stronger it will taste.

Or, you can create a dry rub and apply it generously to the meat before you bake it. Just make sure to keep the dry rubs fairly simple so that they add flavor but don’t overpower the taste of the meat.

Another factor that influences the flavor of beef brisket is the cooking time. One of the biggest mistakes chefs make is not cooking the brisket for long enough. The longer you cook the meat, the more flavorful it will be.

Similarly, many chefs cook their brisket at too high of a temperature. The result is a tough and charcoaly beef brisket rather than a melt-in-your-mouth cut of meat.

How to Choose the Best Brisket

So, you’re ready to go out and select your brisket. There are a few secrets you can keep in mind to help you choose the best-tasting beef brisket.

The first thing to keep an eye out for is marbling. Look for streaks of white fat that run through the beef. These fat pockets will melt while the beef cooks, creating a juicy and rich flavor.

Just keep in mind that the more frequently you cook a certain size, the more comfortable you’ll become doing so. Over time, you’ll be able to get better-tasting results.

Most beef cuts in the grocery store are either Choice or Select. Select briskets are higher in quality than Choice cuts, but both will make great dishes as long as they have good marbling.

What’s so special about beef brisket?

What’s really special about beef brisket is the way that it’s prepared. In many states, such as Oklahoma and Texas, the meat is left to cook and marinate for hours at a time, giving it a unique flavor that you can’t find anywhere else.

Is brisket similar to roast beef?

If you love pot roast then there’s a good chance you’ll love braised brisket. These two dishes have quite a similar flavor. However, smoked beef brisket tastes very different, so the answer to this question depends on the cooking method you use.