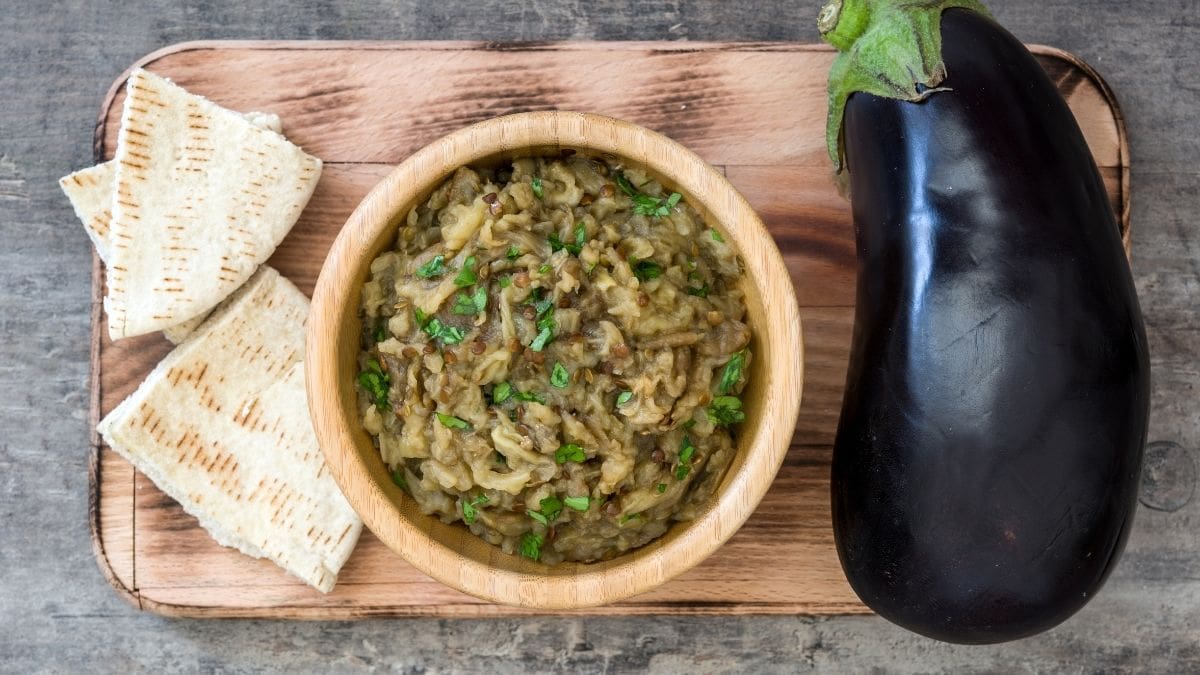 Most of us know and love hummus. It’s a versatile spread that tastes great on bread, veggies, and in cooking!

If you love hummus, I promise you’ll go crazy about baba ganoush! It’s another type of spread made out of veggies.

Baba ganoush tastes earthy, with a slightly sour taste to it. It can also have smoky notes in it, giving it a flavor that pairs well with pita bread or other mild bread.

In fact, it pairs well with just about anything you can imagine! But more on that (and my infatuation with it) later.

What Is Baba Ganoush?

Baba ganoush is a type of spread that’s made out of roasted and mashed eggplant. To make this spread, chefs mix the eggplant with olive oil and add tahini, lemon juice, garlic, and salt.

Baba ganoush is a staple in many Middle East cultures. In fact, the name “baba ganoush” means pampered father in Arabic, most likely due to the rich flavor of the spread.

What’s unique about baba ganoush is that it’s made out of eggplant, which is (some would say) a fairly mild and tasteless vegetable. But I’d call it a delightfully bitterish veggie with personality!

Most of the time, eggplant picks up the flavors of the meats and veggies you mix it with. In baba ganoush, it becomes smooth and garlicky thanks to the mix of ingredients used.

If you’re looking for a healthy, low-calorie spread, baba ganoush is the perfect food to try. ¼ cup of baba ganoush contains just 120 calories, meaning you can eat quite a bit of it without piling on the pounds.

What’s more, baba ganoush contains tons of healthy ingredients. The fat source in the recipe comes from olive oil, but if you choose an extra-virgin blend you can help enhance the health benefits of the dish.

In one serving of baba ganoush, you’ll also find four grams of protein. And, you’ll find two healthy fats that are found in Tahini and that can boost your overall cardiovascular health.

What to Pair Baba Ganoush With

If you’ve purchased (or preferably made!) some baba ghanoush and aren’t sure what to pair it with, we’ve got you covered. There are tons of different foods that you can pair with baba ghanoush for a delicious snack.

Carrots, cucumber, and bell peppers all taste delightful dipped in baba ganoush and are a low-calorie option for a snack. Or, if you prefer, you can eat baba ghanoush with pita chips, crackers, or pita bread.

Or nachos. Or chicken (as a sauce or salad dressing). Or even with noodles like I do!

In traditional Middle Eastern cultures, people eat baba ganoush with kofta, kebabs, chicken shawarma, and falafel. All of these are great dishes to try and make for a fun and exotic snack.

While you can pick up a package of baba ganoush at most grocery stores, it’s so much better when you make it yourself. Since it’s a pretty straightforward recipe, there’s no reason why you shouldn’t! Let’s check out a quick and easy baba ganoush recipe to try!

With these ingredients on hand, you’re ready to start putting together the baba ganoush.

After the hour is up, remove the baba ganoush from the fridge. Serve it with fresh pita bread or your favorite chopped veggies!

Note that in the Mediterranean, this dish is sometimes called moutabal. Some prefer to add sliced tomatoes, onions and green bell peppers to their baba ganoush. I personally prefer the eggplant to dominate, though.

Even though the method for making baba ganoush is pretty similar to that of hummus, the difference in the ingredients alters the flavor significantly. Baba ganoush has an earthy taste while hummus tastes nutty.

Baba ganoush that hasn’t been prepared properly usually tastes quite bitter. Most of the time this is due to not removing the skin of the eggplant before preparing the dish.