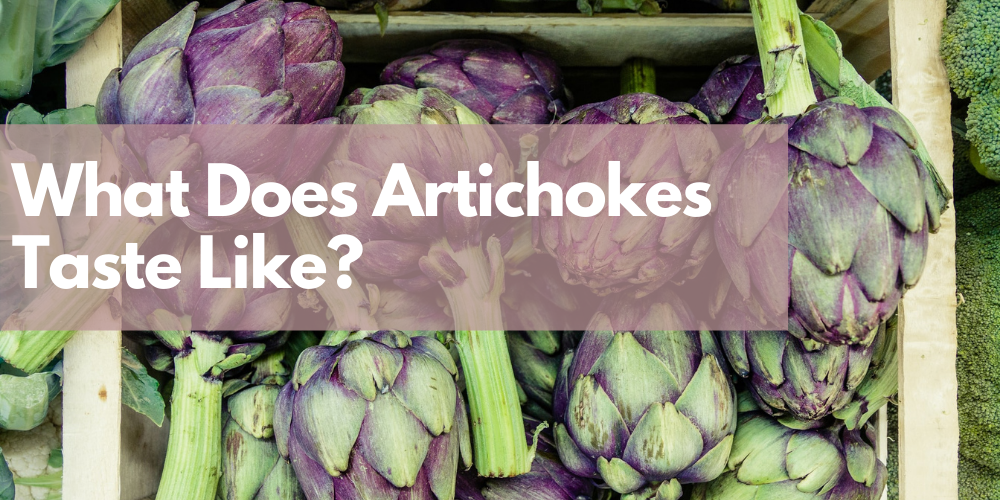 The artichoke hype is similar to the hype around mint chocolate chip ice-cream. So let’s find out what does artichokes taste like?

Some are crazy about the taste and texture while some gag thinking about it. But, given how rare this vegetable is, some people have passed by this in a grocery aisle but didn’t even know about it, especially the taste.

So, it is not surprising at all that the taste of artichokes is a mystery to many. But just because you haven’t tried, it doesn’t mean it tastes terrible. Artichokes are an acquired taste, no doubt that they are packed with nutrients, so you are likely missing out if you haven’t tried one already.

What is an Artichoke?

If you don’t belong to an area that has a supply of artichoke, you are going to be fairly confused the first time you see it. It has a weird oval-type shape with petals covering from all the sides.

Primarily, an artichoke is considered a vegetable. The vegetable itself has two separate segments, the base and the top, which then blooms into an artichoke flower.

The base is the edible part of the vegetable and is cooked in several ways – boiled, steamed, or stewed.

The part of the artichoke that is edible is also the immature and unripened part of the vegetable.

The point of origin of this vegetable is still debatable. While some believe it originated from the Mediterranean, some say it’s from Italy, while the other believes it’s from the northern part of Africa.

According to findings till now, over 100 varieties of artichokes are available worldwide, out of which only 40 variants are commercially available for consumption.

The appearance of an artichoke, especially the most commonly available version, has a dark green color. It has a semi-oval globe shape with leaves poking from all sides like thorns on a stem.

The vegetable’s top pointed end is normally cut out along with the hard exterior of the base. It is only the soft interior part of the base which is cooked and eaten.

The artichoke weighs around 20 ounces, depending on the size.

Coming round to the question of the hour – what does an artichoke taste like?

Describing the taste of an artichoke is pretty tricky. It doesn’t have a very distinct flavor to it, but it compares well with asparagus. The taste of the two is similar, especially when it comes to the crunch and the nuttiness.

As for the aftertaste of the artichokes, it has a subtle sweetness to it. Some varieties of artichokes even have a slight tang to them.

In terms of the artichoke texture, it has a very mushy texture, almost mimicking that of a boiled potato.

For the most part, the taste of the artichoke varies on the way you cook it. Raw artichoke has a very mild and nutty taste, while the deep-fried artichoke has a grilled texture with a charred and nuttier flavor.

Another unique vegetable is taro, find out what it tastes like.

Why Should One Consume Artichokes?

Another essential factor that one needs to keep a check on is the health benefits of artichoke. They are not relatively easy to make, but if done the right way, they leave an impactful effect on your health, especially in terms of the nutritional benefits.

Let us take a look at some of its health benefits.

The very first reason why artichokes are such a hyped vegetable is because of its antioxidative properties.

It helps reduce the risks of free radical damage in the body, reducing the oxidative stress. Not just that, it also has direct impacts on reducing the chances of early onset of aging and even the worse effects of chronic diseases.

Another reason why consuming artichokes is considered healthy is because of its fiber contents. The high fiber helps with better bowel movements and even reduces the risks of overeating.

So, if you are trying to lose weight, this is a healthy vegetable to add to your diet.

3. Loaded with Vitamins and Minerals

Maintaining a balance of nutrients in the body is extremely important. Artichokes have been found beneficial in that prospect. It helps reduce the oxidative stress in the body; it also has a rich source of vitamins and minerals, including Vitamins C, D, K, etc.

The minerals present in artichokes have calcium, zinc, and iron in it, all of which have promising benefits on your body function.

Due to the high antioxidant levels in the artichokes, the same has proven benefits in reducing cancer risks, primarily by boosting the body’s immune system.

It also has proven benefits in lowering the cholesterol levels in the body, especially the bad cholesterol. It helps boost your cardiovascular health and prevents the risks of strokes and cardiac myopathy.

Doctors highly suggest people suffering from diabetes to include artichokes in their diet because of the healthy benefits of the same.

Not many know of this benefit but consuming artichokes have proven benefits in improving your digestion. It helps detoxify the liver, aiding in better function and metabolism of the body.

How Can One Prepare Artichokes?

Now that you know about the basic taste, texture, and benefits of artichokes, the next thing to focus on is how to cook it.

Before the cooking process, one needs to prepare the artichoke, which is where the hard work goes in.

The exterior of the artichoke is not the most inviting. But, once you get past the hard part, it becomes quite easy to cook it.

How to Cook an Artichoke?

Now that you know how to prepare an artichoke, the next thing to discuss is how to cook them.

The two most common ways include boiling and steaming them.

If you are boiling them, I’d suggest getting a pot that can fit these vegetables upside down without making them tumble around the pot. The cooking time for this method is generally around 20 minutes.

Once the leaves come off easily from the outside, it is enough of a signal that the artichokes are cooked.

The steaming process is pretty common with the stuffed artichoke recipe. It mainly includes many seasonings and spices, including garlic, pepper, salt, and even breadcrumbs.

This spice mixture is then stuffed into the artichoke and steamed over a medium flame until the leaves come off quickly, indicating that it is cooked.

How Do You Eat an Artichoke?

One of the common misconceptions that people have about artichokes is that the entire leaf is edible. That is not the case at all. Instead, you need to peel the leaves one by one and scrape the edible part out of it with your teeth and throw the rest away. You usually don’t need a knife and fork for this dish.

It tastes quite nice if cooked the right way. Many people also prefer having a dipping sauce on the side as the leaves don’t taste like much by themselves.

Once you are done scraping off the leaves’ edible parts, you get to the vegetable’s core, which has a slightly chewy and nutty texture to it. For this, you need to use a knife and fork to eat it.

If you haven’t eaten an artichoke before, you will not know the actual taste until you eat it yourself. Depending on how you plan to cook it, be it boil, steam or fry, this vegetable’s flavor will vary accordingly. Even though this does have an acquired taste to it, artichokes can become quite addictive with time. In case you haven’t eaten one before, now is the time.