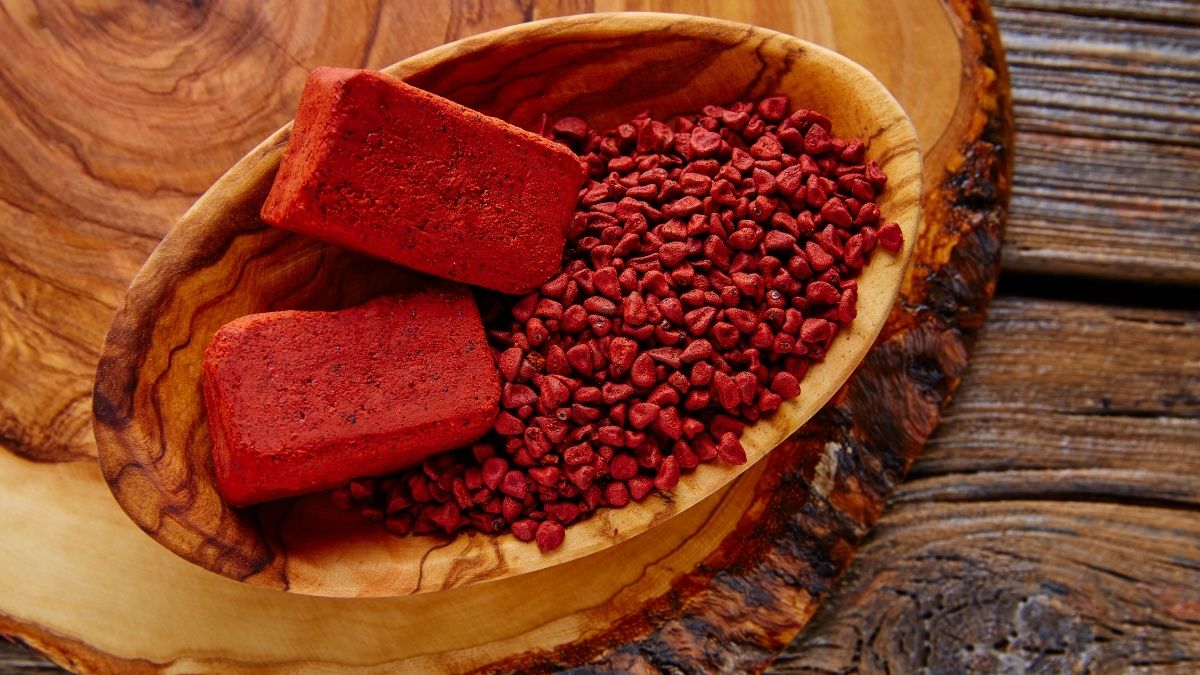 Annatto, not to be confused with amaretto, is a great way to add some zing to your dishes. However, whereas the similar-sounding amaretto is a sweet cherry-almond flavor, annatto is a savory spice used in cooking!

Annatto has an earthy, slightly bitter flavor. It adds a bit of a peppery taste with floral notes and a hint of peppermint.

So, what is annatto exactly? Annatto, also called achiote, achiotillo, bija, urucum, and atsuete, is a spice and food coloring that comes from the Bixa Orellana shrub.

Annatto is native to the Caribbean and Mexico and is grown in tropical climates. In the 1600s, Spanish colonists brought the tree from the Americas to Southeast Asia, where it’s now also commonly used.

In order to make the spice that we know as annatto, growers macerate the seeds in water. The pulp loosens and can be used to make dyes. The seeds are then dried and either ground into a spice or used whole.

Annatto is commercially used to add the yellow coloring we’re familiar with in cheese, butter, margarine, and chorizo.

Annatto is primarily used as a food coloring agent. When used to color foods, annatto is used in small amounts. In these cases, you won’t be able to discern the flavor of annatto.

If you use larger amounts of annatto, however, you’ll notice a slightly bitter, peppery spice. The seeds also have a few notes of peppermint with some aromatic floral notes in the background.

Most people enjoy cooking with annatto because of the bright, appealing color it adds to their dish. However, some people like using annatto in their cooking because of the potential impacts it could have on their health!

Some early research on annatto has shown that it may help suppress the growth of cancer cells. It also induces cell death in liver, pancreas, and prostate cancer cells.

These anticancer properties could be thanks to the carotenoids that it contains as well as the vitamin E found in the powder. More conclusive research will be needed in order to fully understand these benefits, however.

Another health benefit of annatto is that it may help improve eye health. Annatto contains high levels of carotenoids, which are linked to improved vision.

The norbixin and bixin carotenoids found in this spice have been linked to decreased macular degeneration in adults. Scientists are still conducting research to fully understand the benefits of annatto for improving your vision.

Annatto contains a number of different compounds that have antioxidant properties. This includes flavonoids, carotenoids, and terpenoids.

The reason why antioxidants are so important is that they counteract free radicals, which destroy cells. By consuming lots of antioxidants, you can reduce your risk of developing a number of chronic diseases such as diabetes or heart disease.

How to Cook With Annatto

So, you’re ready to get started cooking with annatto? Good for you! This spice is extremely versatile and is easy to use in a variety of different dishes.

If you are cooking with annatto powder, you can turn it into a paste by mixing it with water. The paste can then be spread on meats, poultry, and fish to give them flavor and to add a unique marinade.

Another way to use the powder is to add a pinch or two to soups, lentils, or beans. The dark color of these dishes pairs perfectly with the bright orange color of annatto, creating a flavorful and brightly colored dish that’s highly appealing.

Where to Buy Annatto

If you’re looking to buy annatto, you might have some trouble getting your hands on it in local grocery stores, depending on where you live. In areas with a large Latino population such as southern California, Florida, and Texas, you’ll likely have no issue finding it in the grocery store.

However, if you live in more northern areas, you’re less likely to come across annatto in your local supermarket. In these cases, you may have to head to a Latino or international shop to get your hands on this spice.

Annatto is sold in a few different ways. You’ll find it sold as a paste, as whole seeds, ground into a powder, or infused into lard. It’s usually packed in bottles, vacuum-sealed bricks, or plastic bags.

When you buy annatto make sure to carefully read the food label of the product you’re purchasing. Ground annatto is sometimes mixed with other spices or with cornstarch and may not have as pure of a flavor as you’re looking for.

How to Store Annatto

Once you’ve purchased some annatto, it’s important to know how to store it. Luckily, both the powder and the whole seeds of annatto keep for a long time In fact, as long as you store it properly, annatto can last for as long as three years!

To properly store annatto, keep it in an airtight, glass container. Make sure to store the spice away from the light, as this can cause its bright color to fade and the mild spice to lose its flavor.

If you’re storing annatto oil, you can keep it in a glass bottle. Store the bottle in the refrigerator to prevent it from going bad.

Some people think that just because it’s found in the Latino section of the grocery store, annatto is spicy. However, annatto is actually a very mild spice that has earthy tones. It isn’t spicy at all but does have pepper notes in it.

What can I use instead of annatto powder?

If you don’t have annatto powder on hand, there are a few spices you can substitute. Paprika and turmeric are two spices that make great annatto substitutes. You can even blend the two to get more of the orange color and a unique taste!

Is annatto natural or artificial?

Unlike many of the colorants we find in grocery stores, annatto is a completely natural colorant. It’s a great natural alternative to yellow and orange food coloring.