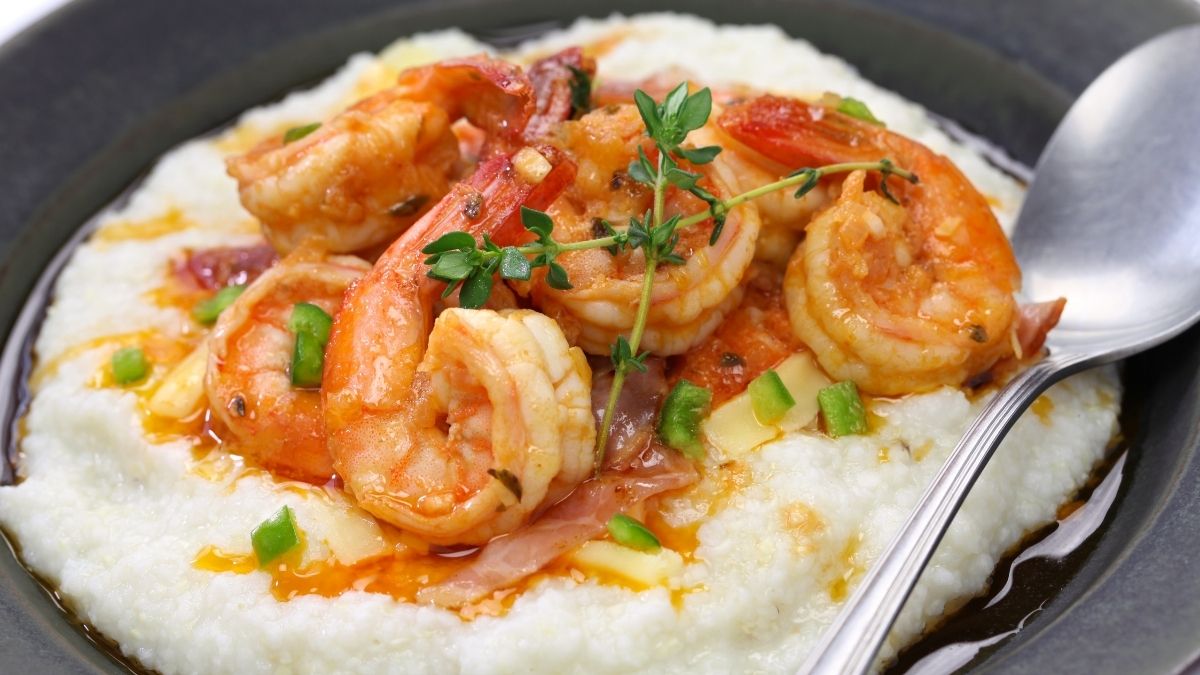 If you’ve ever visited a Southern state then you’ve probably noticed cheesy grits or another type of grits listed on many restaurant menus. That’s especially true if you’re eating at a diner or a breakfast place.

However, for anyone who’s not used to seeing grits on the menu, it can be a bit of a hit-or-miss to order these grits. After all, you don’t know what they taste like!

Grits taste smooth and mild, with a flavor similar to cream of wheat. They’re usually mixed with butter, salt, cheese, or even shrimp to add extra flavor and bring out the mild corn flavor.

Grits are a Southern dish that you’ll find in many different Southern US states. They are made from a starchy and sweet type of corn. The most common types of corn used for grits are white corn, yellow corn, and dent corn.

Dent corn goes through a process that soaks the grains in an alkali solution for a few days at a time to remove the hard outer shell. Then, the remaining grain is ground into grits.

Chefs make grits into several different types of dishes, including breakfast grits and shrimp and grits. They’re usually topped with salt and butter, but you can add any other topping you like.

One of the first (and tastiest) types of grits is stone-ground grits. These grits are coarsely ground between stones of a grist mill.

Stone-ground grits are made out of the entire kernel, giving them a speckled appearance. They have a rich flavor and toothy texture and are much less processed than many other varieties of grits.

Regular grits are sometimes called quick grits and are very similar to stone-ground grits. These grits are ground very finely so that they will cook up quickly, taking just 5 minutes on the stovetop.

You can also find this type of grit in a medium grind. These grits still cook up fast, taking 10 minutes of prep time before they’re ready to eat.

One of the most popular and easy-to-find types of grits is instant grits. Instant grits are grits that are precooked but have been dehydrated so all you need to do is add them to a pot of boiling water.

Instant grits are great if you’re in a pinch and need to quickly whip up a batch of the meal. However, they tend to be much less flavorful than other types of grits such as hominy or stone-ground grits.

Many people enjoy eating hominy grits, which is a type of grit made out of corn kernels soaked in either lye or lime. Soaking the kernels helps remove the tough hulls from the outside of the corn.

Once the hulls are softened, manufacturers wash the kernels to get rid of the outer hulls. Then, they dry the hominy and sell it in bags of dried, ground grits or in cans of grits stored in preservative liquid.

Where to Buy Grits

Are you ready to try making a batch of these delicious treats yourself? If you want to know where to buy grits, there are a few different places you can look for them.

Many grocery stores stock grits, especially if you live in the southern states. However, if you’re struggling to find them in your grocery store, you can look at online retailers and place an order for grits.

You should note that the most common types of grits are instant grits, which are usually kept in the cereal aisle. Stone-ground grits are the least common type of grits, and usually need to be ordered from specialty food shops.

How to Store Grits

So, you’ve purchased a package of grits. However, you’re not quite ready to use them yet. If that’s the case, just store the grits in a sealed container and keep them in a cool, dark location.

Once you’ve cooked the grits, you can store any leftovers in sealed containers and keep them in the refrigerator. They’ll keep for 3-4 days and can be easily reheated in the microwave or on the stove.

We know that there are tons of questions to ask when it comes to grits. That’s why we’ve put together a few answers to some of the most frequently asked questions about this food.

Are quick grits and instant grits the same?

What’s the secret to good grits?

The secret to the best grits is knowing that they absorb milk, broth, and water better than cream. The best way to get creamy grits without making them soupy is to use half broth and half milk and to add just a dash of heavy whipping cream at the end of the cooking process.

Can you eat grits on a low carb diet?