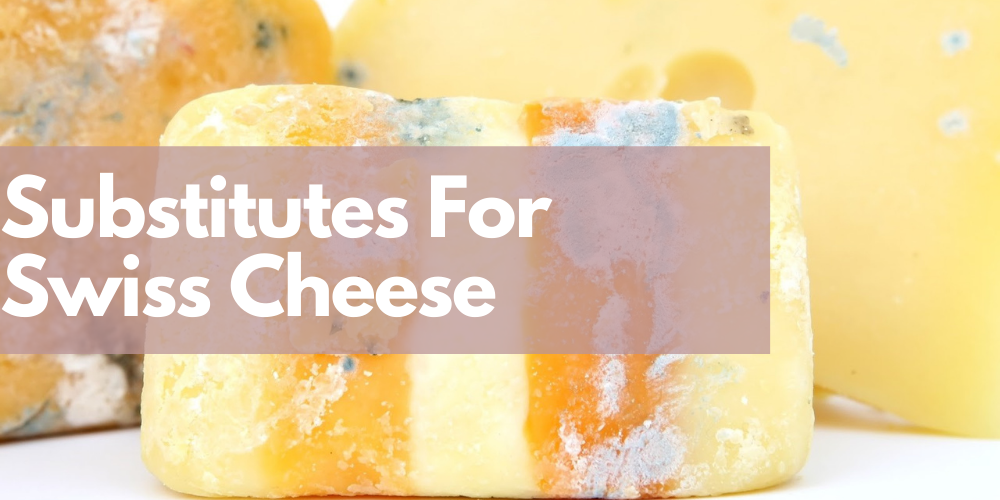 Apart from their picturesque backdrop, high-end luxury fashion, and their fine chocolate, the Swiss are also known for their cheese. While they produce a variety of Swiss cheeses, it is the readily accessible Emmenthal that is available in the markets. Some of the variants of cheese produced in the country are localized to that province only.

But, even that one variant is versatile enough to suffice your cravings for a quick snack or as a filling to your favorite sandwich. The gooey and mild savory taste and texture of the cheese make this a worthy purchase.

The only problem is its availability in the markets throughout the year. So, what can you substitute it with? Well, that is what I am going to discuss here in this article.

Find out the substitutes to manchego cheese.

Swiss cheese has a very mild flavor with a long-lasting after-taste. It is made with cow’s milk and melts in evenly to leave any dish with a gooey and cheesy taste and flavor.

It has a semi-hard texture with a slight yellow tinge to it that can be enjoyed just by itself or even on pizza and sandwiches.

Aside from the commercially available Emmenthal, Swiss cheese is available in a few other varieties including:

Because of the aging process that the cheese undergoes, it is slightly more expensive than the commonly available cheese variants in the market.

What is the Best Substitute for Swiss Cheese?

Since Swiss cheese has such a unique taste and flavor to it, it is not surprising that there are not many substitutes to this cheese. While some mimic the flavor, some mimic the taste. But, finding a particular cheese that serves as a 100% similar replacement isn’t possible.

Still then, I have listed out a few alternatives for Swiss cheese that you can use in case you can’t find any.

Unless you are a cheese nerd, you wouldn’t be able to distinguish Cheddar from Emmenthal, or the commonly available Swiss cheese variant. The texture and flavor of these two kinds of cheese are pretty similar.

It is just the appearance that differs. While Swiss cheese has round holes inside the block of cheese because of the aging and aeration, Cheddar is a solid block of cheese.

Since cheddar is made with cow’s milk, the ground taste is a lot similar to Swiss cheese. It has a firm texture that has an intense flavor and smell that keeps getting more robust with maturation.

It is a readily available variant, which is healthy as well. It is rich in proteins and calcium, making it suitable for breakfast meals.

Since cheddar is so affordable, using it as a substitute for Swiss cheese is always economical and doesn’t affect the taste drastically too.

Made with raw cow milk, Fontina cheese is another substitute for Swiss cheese that I like personally. It is a popular Italian cheese that has a soft and creamy texture. It melts pretty much like Swiss cheese, hence considered a good substitute.

But, unlike Swiss cheese which has a mild taste and flavor, Fontina is quite a strong cheese with robust flavors and pungent aroma. It also has a nutty aftertaste to it.

If you are looking for a good substitute for Swiss cheese in terms of texture and taste, Fontina is a good option. But, remember that the strong taste of Fontina doesn’t go with every dish you add it to, so you need to be careful with that.

While people raved about mozzarella being the queen of Italian cheeses, it is likely that Burrata has overthrown the winner. It is one of the best soft Italian cheeses that is versatile and extremely savory.

For those who aren’t aware of what kind of cheese burrata is, it is a shell of mozzarella stuffed with Stracciatella and cream. The combination of the two leaves an extremely creamy taste and texture to any dish that you consume.

The reason why it serves as a good replacement or substitute for Swiss cheese is because of the similar kind of texture and subdued flavor. Burrata has a very mild flavor with an incredibly creamy texture that works on its own or even when added to a dish.

It is a slightly expensive cheese, but that a little goes a long way, you wouldn’t regret making this switch.

For the cheapskates who don’t want to splurge out on Swiss cheese but want that similar savory taste and creamy texture, Mozzarella is a good option.

Unlike Emmenthal which is made with cow’s milk, mozzarella is an Italian cheese made with buffalo milk. But, with its growing popularity, manufacturers are switching to cow’s milk for making mozzarella, and that one is equally delightful to eat.

The cheese has a very milk dairy flavor with a glossy exterior that makes it perfect for melting on top of dishes or eating it raw in salads, much like Swiss cheese.

If you are buying mozzarella in bulk, make sure you preserve it the right way by storing it inside the fridge with the serum that it comes packed in.

Italy is famous for its cheese, and this one is yet another variant. Unlike the previous ones, provolone has a tangy aftertaste with a mild sweetness to it. Since Swiss cheese doesn’t have a strong flavor or sweetness to it, using just provolone as a substitute in the dishes will affect the taste.

Instead, mix provolone and cheddar and then add it to the dish that you otherwise would have added Swiss cheese to.

Provolone is readily available in markets, so you wouldn’t have a hard time finding it and using it as a substitute for Swiss cheese.

Have you tasted cottage cheese? If not, then find out what it tastes like.

When it comes to substitutes for Swiss cheese, there are quite a few varieties available. And, for the most part, most of these substitutes are less expensive and mimic the taste and texture reasonably well. If you have been looking for good options, I have sorted out the top ones accordingly in this article. So, the next time you can’t find Swiss cheese in the market, make sure that you try out these alternatives instead.