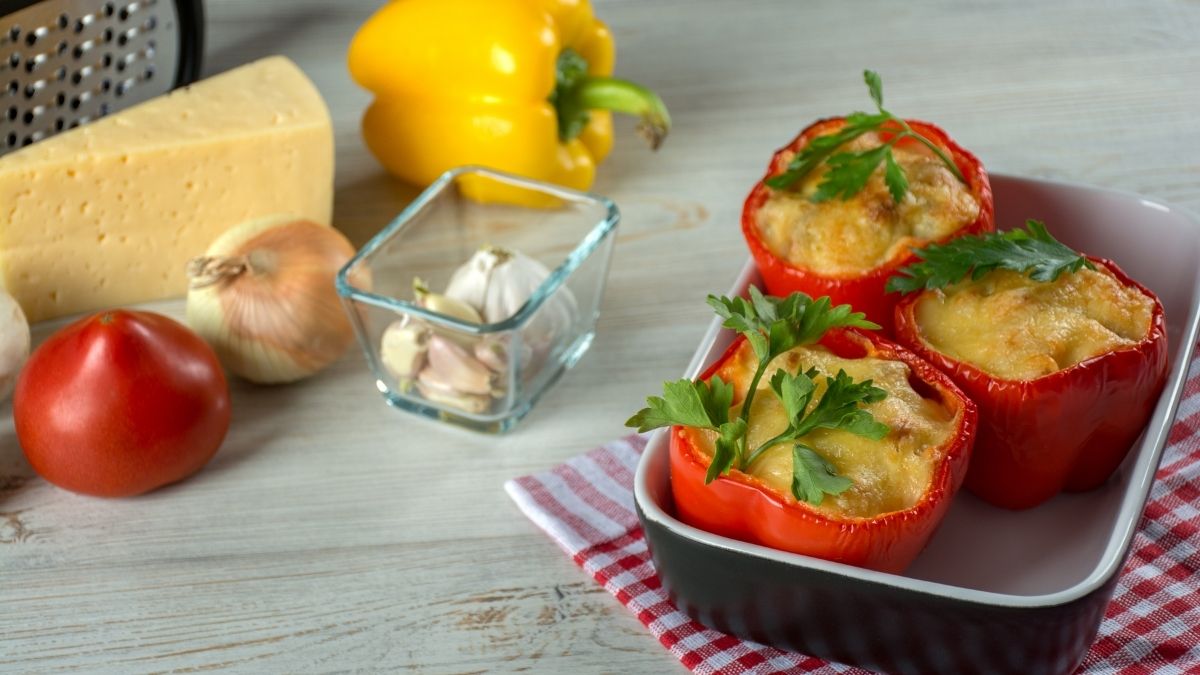 Stuffed peppers are a great dish to have on hand when you need something warm and comforting. They’re also an inexpensive, healthy meal that can feed your whole family.

You can either go heavy on the meat and rice or make your stuffed peppers an ideal vegan recipe.

Since this dish involves making the stuffing separately with the peppers on the side, it is tough for you to make them in small batches. You’ll definitely find yourself with leftover stuffed peppers one way or another! So what do you do if you want to reheat them? Do they come with instructions for reheating the next day?

In this blog post, we’ll share how to re-heat stuffed peppers so that they taste just as good as they did when first made!

The first thing to consider when reheating stuffed peppers is what type of dish you are going to be serving them with. This will depend on the ingredients that were used in the original recipe, as well as personal preference. For instance, if you have been eating a lot of Mexican dishes lately or plan to serve your peppers alongside rice and beans, then it would make sense to cook them in sauce before heating it up again.

So, to enjoy your stuffed peppers fresh, here are some easy and effective reheating methods that can effectively make you feel like you’re eating freshly stuffed peppers as if you just made them.

Reheating a stuffed pepper inside the oven is possibly the best option, especially if you have frozen peppers right out of the freezer. Using an oven doesn’t require defrosting, which means that you can directly put the frozen pepper on the baking dish and put it inside the oven. Here’s how:

If you don’t have a lot of time on hand and need to reheat the stuffed peppers quickly, you can always rely on the microwave. However, reheating in a microwave often leaves the peppers soggy and the pepper loses its crunch. If you are okay to compromise that, this is likely the fastest way of reheating. Also, using a microwave comes in handy if you don’t want to reheat many peppers and just one for yourself.

If you’re looking for a quicker, more convenient reheating method than the oven or stovetop, consider using your toaster. It’s perfect if you want to keep the pepper crispy on the outside with an extra oomph of flavor!

How to Prevent the Stuffed Peppers from Getting Soggy after Reheating?

The best way to prevent this from happening is by using an oven for the reheating process. Instead of using a microwave, the oven heats the pepper evenly from the inside, leaving the outside crisp and crunchy.

Another way to prevent the peppers from getting soggy is to undercook the stuffed pepper less in the first round of cooking. Instead of cooking the peppers all the way through, make sure that you cook them halfway through and cook the rest when you are reheating them.

As for the stuffing, adding some oats or quinoa to the rice stuffing reduces the moisture content, thereby retaining the peppers’ crunch instead of making them soggy.

Can I freeze stuffed peppers?

Yes, stuffed peppers are entirely safe for you to freeze and batch make them for use in the next few weeks. If you have large quantities of stuffed peppers that are leftover, it is always ideal that you freeze them to enhance their shelf life.

How long does the frozen stuffed peppers last for?

Stuffed peppers are a treat for your taste buds and have plenty of juiciness to them. So, if you happen to have leftovers after cooking up this dish, we’d always suggest that you reheat it correctly by following any of the methods above.

What if you don’t feel like eating another batch of stuffed peppers this week?

Easy peasy! Mix things up and create something new with your leftover dish. These ideas might be good: