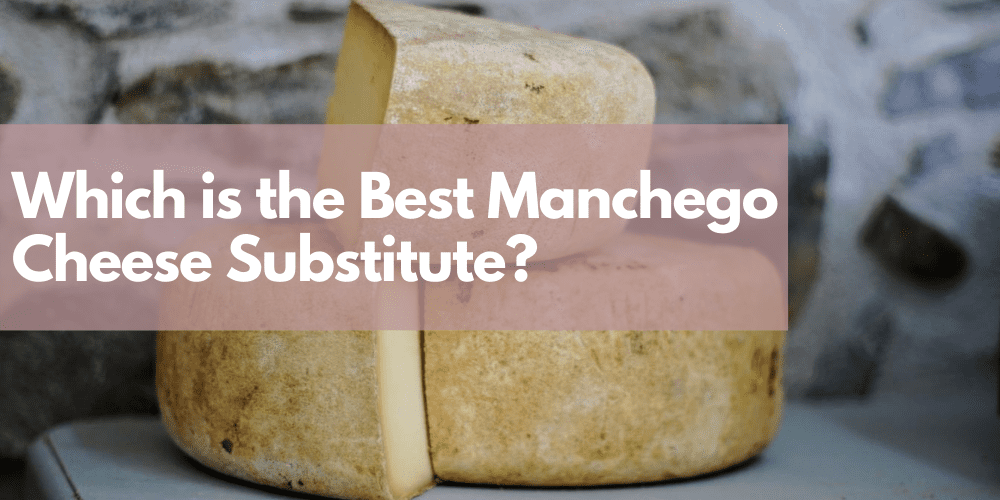 Every cheese that you come across be it the normal processed cheese or even the artisan cheeses, every person has their favorites. When it comes to favorites, the last thing you’d want is likely to run out of them. Especially for cheeses like the Manchego Cheese, which is not available worldwide easily, finding substitutes is essential.

But, is there any Manchego cheese substitute that stands out in terms of taste and flavor? While you might think there are not, there are a few that come close to replicating both the taste and the flavor as well.

What Can You Use Instead of Manchego Cheese?

When talking about the Manchego cheese substitutes, you will likely have a hard time coping. Balancing the perfect blend of taste, flavor, and texture is just too tough of a game.

But, we have sorted through a few that we think lives up to the hype and can be considered good substitutes.

Don’t get deterred by the name of the cheese. Tomme de Brebis, also known as Tomme de Brebiou, is a popular French cheese. It is predominantly popular around places like Corsica. The cheese itself is made from the Corsican sheep’s milk.

While this cheese is mainly made from sheep’s milk, there are a few other alternatives that use cow’s or goat’s milk. It is one of the best Manchego cheese substitutes because of how similar the taste and texture is. It has the same firm texture with a buttery inside that melts in your mouth.

Even this cheese develops a more complex taste and flavor as it ages and also forms granules inside. If you are looking for the best alternative for Manchego, this is the one.

Asiago is a popular Italian cheese that hails its origins from Veneto, Italy. Unlike Manchego cheese, this one is made from cow’s milk and is aged for a longer time to preserve its unique texture and flavor. Asiago Pressato, which is the fresh version of the cheese, has a creamier and softer texture while the aged Asiago mimics the texture of Manchego cheese. It develops a very crumbly texture.

The taste and flavor of the cheese have a very creamy and pungent aroma that will make up for the lack of Manchego. It is quite versatile with its use as it can be melted, sliced, or even grated on the top of the dish you are eating.

If you want to get your hands on some local American cheese alternative for Manchego, Monterey Jack is your option. It is a cow’s milk cheese and isn’t aged for a very long time. For the most part, it is aged for a maximum of 6 months, following which it is processed and sold in the market.

It serves as a good substitute for Manchego cheese because of the similar firm texture and buttery insides.

If you want the best variant, try and find the ones that are aged the maximum as the flavor intensity is the maximum in those.

No, we are not talking about the dog breed but one of the popular Manchego cheese substitutes. This is also termed as Queso Chihuahua and is a popular Mexican cheese.

In terms of taste and texture, this cheese does mimic a very sharp mix between Cheddar and Manchego. It has a semi-soft consistency, so you know how amazing and versatile this cheese is.

You can melt it and use it as a dip, in the cheese fondues, and even drizzle over the nachos and chips for that extra kick of flavor. The cheese is predominantly made from cow’s milk, which undergoes a simultaneous heating and cooling process and then mixes with annatto for the color and rennet for curdling the cheese. The cheese is aged for quite long, somewhere between 6 months to a year, depending on what kind you like.

If you are a cheese on pasta enthusiast and love putting together a cheese board, you will likely know what Pecorino is. This famous Italian hard cheese has a very strong and distinct flavor that you will grow to love. It is touted as one of the best substitutes for Manchego because it is made from sheep’s milk.

The cheese is matured for different time frames, some less and some more. The more the cheese is aged, the harder the texture becomes. People who love cheese do prefer eating the more aged version.

It has a crumbly texture that melts in your mouth as you eat it. The flavor has a distinct and sharp nutty and buttery taste and flavor to it.

You can’t necessarily go wrong with the taste of Cheddar. This age-old cheese that originates from back in the 1100s in the southwest of England is a cheese loved worldwide. The cheese is aged for quite some time in humid weather conditions to ripen quicker.

The cheese itself is made from milk from cows fed with grass containing carotene. This is what imparts the significant white or yellow color of the cheese.

Sometimes, you will likely find a darker hue of orange or yellow in the cheese variant, which is because of annatto added to the cheese. As for the taste, it has a very distinct and sharp taste and flavor to it.

If you find any cheese addicting after the first bite, it will hands down be Comte. It is made from cow’s milk but has a similar richness to the taste and flavor like the Manchego cheese. It is a French cheese, so you will likely find them in high-end supermarkets.

It comes with a firm texture that gets harder, the more it is aged. Aside from that, in terms of taste, it has a vibrant aftertaste that sticks to your taste buds even after you are done eating it.

The cheese does have a sweeter taste to it compared to how Manchego cheese tastes, so that again can be a little different. But, more or less, if you are looking for a viable substitute for Manchego cheese, this stands out as the right choice.

Mozzarella mimics Manchego cheese in terms of texture and the overall taste. The rich, gooey, and the extremely stringy texture of the cheese make this one of the best substitutes.

The cheese mainly originated in Italy but was later relocated to Australia during World War II. As for the ingredients, mozzarella is made with cow or buffalo milk. It undergoes a pervasive process of curdling, drying, and salting, after which the cheese is finally made.

If you are making some sort of fondue or baked dish and want to replace Manchego, this one serves as a good option.

If you aren’t precisely a cheese enthusiast, it is likely, you wouldn’t know what Zamorano is. It is a very popular cheese made from sheep’s milk, which has a lot of similar characteristics like Manchego. It did originate from Zamora in Spain and hence the name.

This cheese is aged for 6 months and has a semi-hard texture outside with a creamy and soft inside.

One of the reasons why this serves as one of the best Manchego cheese substitutes is because of the distinct sheep’s milk aftertaste that it has.

As tough as it is to pronounce the name of this cheese, it is just as amazing in taste and flavor that it has. You will readily find the Americanised version of this French cheese in the supermarkets quite easily.

The cheese itself is made from cow’s milk and comes with a thick orange rind and a pale yellowish interior. The taste of the cheese is very subtle, which is one of the main reasons it is such a favorite. It doesn’t overwhelm any dish it is added to.

The texture of the cheese ranges from something along the lines of soft, smooth, and silky texture. The aroma and pungency of the cheese are quite distinct, and not many people like that.

Last but not least, on the list of substitutes for Manchego cheese that you can check out is Parmesan. It is one of the most priced Italian cheeses which is made from cows who just graze on fresh hay and grass.

This cheese has a tough texture and feel to it and has granules inside that are formed because of the aging process. The sharp savory and nutty taste of this cheese are what make it a worthwhile option.

You can use its shavings on salads and even grate it on top of a pasta dish. It is quite versatile in terms of that.

What Can You Use Instead of Manchego Cheese?

If you want an absolute replica of Manchego cheese, it is mozzarella. It has a similar gooey and molten texture and tastes a lot similar too. Even this is a semi-soft cheese like the original one, making this a perfect substitute. The high moisture content in mozzarella makes this a perfect topping for pizzas and any dishes that you would normally use Manchego on.

Find out the substitutes for Swiss cheese.

Is Manchego Cheese Similar to Gruyere?

No, they are not necessarily similar but can be used as substitutes. If you don’t have Manchego or mozzarella, which is the closest substitute, Gruyere serves as a good alternative. The only downside is the stronger flavour and pungency. It won’t be the perfect replacement but is a good substitute if there’s no other option available.

Can You Substitute Manchego for Parmesan?

In case you were looking for some good quality alternatives for Manchego cheese, these are some of the best ones that you can take a look into. After all, we all like a variety when it comes to cheese, right?