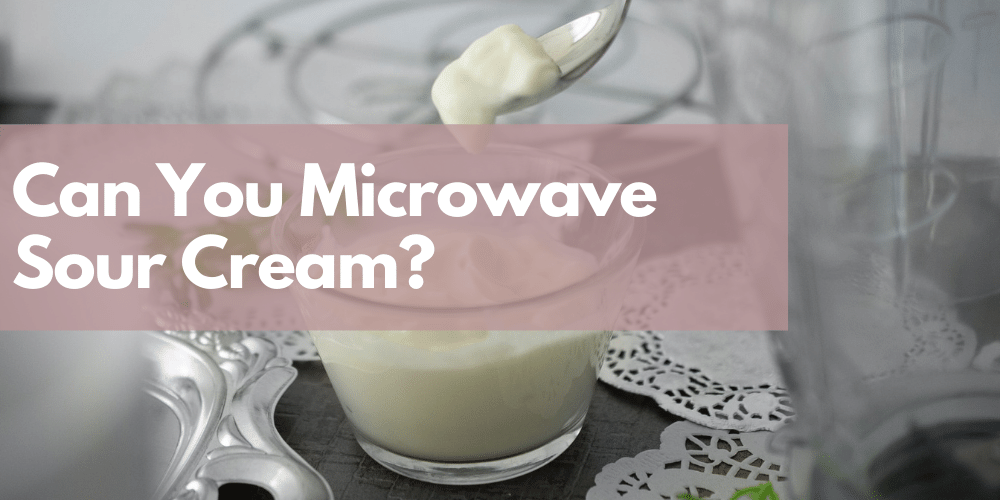 Sour cream is an extremely versatile topping. But can you microwave sour cream, let’s find out.

From savory dishes to desserts, it elevates the richness and creaminess of a dish to a whole new level. But, I was laughed at when I asked whether it’s okay to microwave sour cream or not. Generally, if you have leftovers with some sour cream on top, you will microwave it without a second thought.

But what if it’s straight out of the package? I mean, I had a new box lying somewhere around the kitchen, and I wanted to try it out as a dip for some fresh veggies. So, microwaving it till it’s a little softer and gooey was what I thought was standard. Guess that’s not the case at all.

There are a few hidden tips and tricks that you likely don’t know of when it comes to microwaving sour cream, and I thought I’d share them with you.

What is Sour Cream?

Sour cream is made by fermenting the regular cream with the lactic acid bacterial culture, giving the dairy product a natural tart taste.

It has a white, rich, and creamy texture and is often eaten as a condiment or used as a dip or dressing for different foods.

Is It Safe to Microwave Sour Cream?

Before I discuss the precautions while microwaving sour cream, you must know what happens when you microwave sour cream.

Sour cream, in general, has a ton of bacterial growth and culture in it. Exposing the same to high temperature like in the microwave will end up killing those bacteria.

Thus, you should start with small batches of the condiment and heat it at a very low temperature to prevent any additional risks of burning or separating the milk solids in the cream.

How to Microwave Sour Cream?

If you asked me how to microwave sour cream, I’d suggest you don’t. But, given that you have no other choice but to do it, you need to follow a few key points. It is essential to be patient, avoid overheating, and keep a close eye on your microwave while it’s heating.

Here are a few steps you need to follow:

Heating smaller quantities of batches of sour cream helps prevent curdling and keeps the cream intact. If you start seeing lumpy texture in the sour cream, the milk solids are likely beginning to curdle, so take the dish out immediately.

Additionally, if you consume low-fat or no-fat sour cream, I’d suggest not reheating it because it will curdle the moment it comes in contact with heat. Instead, use the full-fat variant.

Is It Safe to Reheat Sour Cream on Leftover Foods?

Some of the most common types of foods that have sour cream as a dressing includes a burrito, taco, and nachos. I bet you are wondering if reheating the sour cream in leftovers is safe or not.

While there is nothing wrong with reheating the leftovers with sour cream, it risks your food becoming soggy and wet after reheating.

If you don’t mind that, I’d say go for it but ensure not to overheat the leftovers with the sour cream. The best way to reheat would be to remove the cold toppings and then reheat the rest in the oven to have that crisp and fresh flavor and texture to the dish.

Can I Reheat Sour Cream That Has Been Heated Before?

No, I wouldn’t suggest you do that. If your sour cream has already been heated once, the cream’s bacterial growth is likely dead. So, reheating it again increases the risks of curdling the cream.

It means that if you need to reheat the sour cream, do it once and do it when it is new out of the package.

Does the Fat Content in the Sour Cream Matter While Reheating?

Yes, the fat content in the sour cream plays a significant role in the reheating process. Experts suggest using full-fat or at least low-fat sour cream variants for reheating.

Is Sour Cream the Same as Crème Fraiche?

Sour cream and crème Fraiche are often considered the same food because of the process of manufacturing.

Both use a bacterial culture for fermentation, but the main difference is the fat content. Crème Fraiche has a much higher fat content in comparison to sour cream.

Since the fat content is high in the latter, it is often suggested as a better substitute for sour cream if you want to reheat it to use as a dip or dressing.

Is It Safe to Freeze Sour Cream?

Yes, it is safe and possible for you to freeze sour cream to preserve it for longer. The moment you thaw it, it loses the previous creamy texture and tends to lose the prior consistency.

So, if you planned to use it as a topping for dishes, it won’t be suitable anymore. But, if you want to use the same for desserts, it adds a beautifully rich and creamy taste to the dish along with some natural tartness. Apart from sour cream, cream cheese frosting on cakes tastes heavenly. Find out if you can freeze cream cheese frosting.

The only time I would suggest you reheat sour cream is if it’s part of some leftovers. If you are planning on doing it by itself, be careful with the process. Start with smaller batches and work your way up. Additionally, keep an eye out for the progress. If you don’t want to eat chunky sour cream with curdled milk, be vigilant with the process.